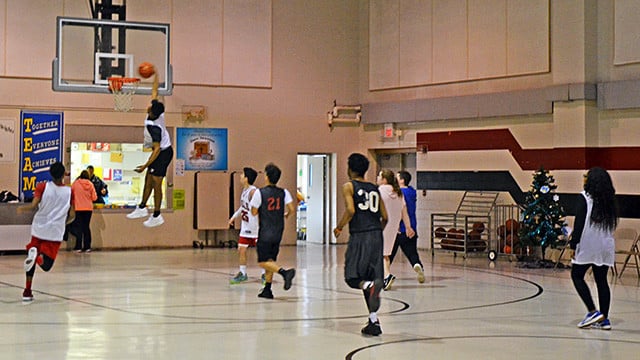 LANSING, Ill. (January 3, 2019) – Lansing’s oldest school was founded the same year that Lansing became a village—125 years ago. St. John Lutheran School has served many families over the decades, and some of the school’s past students gathered on Sunday, December 30, 2018, in the school gym for alumni volleyball and basketball games. Joining them were former teachers, parents, and two of the school’s past principals, Hal Gronewold and David Swanson.

Gronewald began teaching at the school in 1960 and served as principal from 1968 until 1984. Swanson followed Gronewold as principal from 1984 until 2011. Gronewold saw the school through many fluctuations in enrollment. He recalls years when it was down to 60 and years when it was well over 200. Current enrollment stands at 58, but in a school that size, many emphasize that it’s much like a family.

“I think it’s great we’ve been going this long and I hope we can keep going longer,” said Gronewold, who is still active in the church, doing services when called upon and visiting shut-ins who can’t make it to church services.

“I’ve always enjoyed the closeness of the faculty,” said Lynn Erke, who retired from the school in 2013 after teaching first grade there for 10 years. “The leadership is rooted in the gospel, and that was my whole reason for teaching. The weekly chapel brought everyone together, and it’s really like a family. And I always loved how the older kids were buddies with the younger ones. It’s all about relationships.”

Gronewold said that when he taught and served as principal, he was also a coach. He remembers that there were more sports back then.

“Even with the low enrollment, girls volleyball was first in season and third in tournament this year,” said Erke. “They only had six girls with no subs. I was so proud of them. So far the boys basketball team is undefeated, too. For a small school, we have excellent dedication.”

One of her former students, RJ Ogom of Flossmoor, showed up to play in the alumni basketball game. He now towers over Erke and is a junior at Homewood-Flossmoor High School. “This was a good thing,” he said of the game. “It’s where everything started for me, and it’s good to come back.” Ogum is one of five kids in his family who have attended St. John Lutheran School. He has two sisters who are currently students.

“We had a nice variety of high school and college kids who came to play in the games,” said Erke. “And even one who is in the Army.”

Max Jobbe attended St. John from grades 3 through 6, when his family relocated to Valparaiso. He returned to play in the alumni volleyball game and has fond memories of his time spent at St. John. “You’re in the same classroom all day and not moving from one class to another. You’re friends with everyone. There’s no enemies, and everyone gets along, and you have great relationships with the teachers,” he said.

Anthony Porter, a 2013 gradate from Chicago Heights echoed those sentiments. “The teachers here were really great, and the small class size was nice,” he said.

Small class sizes have big advantages, but it can cause financial struggles for private schools. Current principal Allison Clous said that continuing to provide a Christian education for students has been difficult, but “it’s a lot of the school and church supporting each other.”

Eileen Gronewold, a member of the anniversary committee and wife of the former principal, was excited to see the turnout for the alumni games. “I’m glad to see so many kids come out—and they were playing hard!” she said. She reiterated what a family feel there is there and is glad that her three grandchildren are able to attend the school. “We just want to put out that we’re here,” she said. “Some people see this building and don’t realize it’s a school.”

“I loved seeing how mature these kids are. I didn’t even recognize some of them,” said Toya Jackson, the mother of a former student who now attends Purdue University and who has been working on projects with the anniversary committee, which included a picnic last summer, an upcoming bowling event, and a celebration dinner in April.

“St. John has always had a family atmosphere. Everyone has been supportive of the Christian day school. Many of the students moved on to do well in high school and college. We’re very proud of our alumni,” said David Swanson, who was principal of the school for 27 years.

“It’s been a joy to be part of the school. We’ve had good years and great times. It’s always been a joy,” said Hal Gronewold.