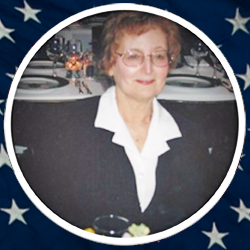 She was born on June 22, 1932, to Joel and Sheba (Sher) Greenberg in Philadelphia, PA. After graduating from high school, Irene enlisted in the United States Air Force on June 25, 1952, and was stationed at Maxwell Air Force Base in Montgomery, AL. There she met her husband, James Edward Gaffney, and they were married on April 3, 1954. She was honorably discharged on May 14, 1954, and awarded the National Defense Service Medal and the Good Conduct Medal.

After her husband’s discharge, they relocated to his hometown of Chicago, IL, where they raised five children. The family moved to Bridgeview, IL, in 1971, and Irene lived there until the death of her husband, at which time she downsized to a townhouse in Batavia, IL.

After retiring from RR Donnelley as a keypunch operator and tape librarian, she joined the local chapter of the American Legion and served as their Sergeant-at-Arms. Irene was extremely proud of her military service.

Irene belonged to a charity group who met to knit and crochet hats, scarves, and blankets, many of them for children in foster care. Family members were also lucky recipients of handcrafted baby blankets and sweaters. And Irene was an excellent seamstress as well.

As an adult, Irene learned to ride a bike and to swim. She walked her dog, Misty, and attended water aerobic classes.

Sadly, after several falls, Irene was diagnosed with dementia, and required a safe and supervised living environment. She moved first to assisted living in Country Club Hills, IL, then to memory care near her daughter in Greeley, CO, and finally to a nursing home. Even as the disease progressed, Irene never failed to charm the staff that cared for her.

Please join us in celebrating Irene’s life and spirit. Visitation will be on Friday, February 15, from 4:00–8:00pm, and a memorial service will be held on Saturday, February 16, at 10:00am at Schroeder-Lauer Funeral Home, 3227 Ridge Rd, Lansing, IL. Internment will be at St. Mary’s Cemetery in Evergreen Park, IL. In lieu of flowers memorial donations may be made in Irene’s name to the Alzheimer’s Foundation of America, www.alzfdn.org.