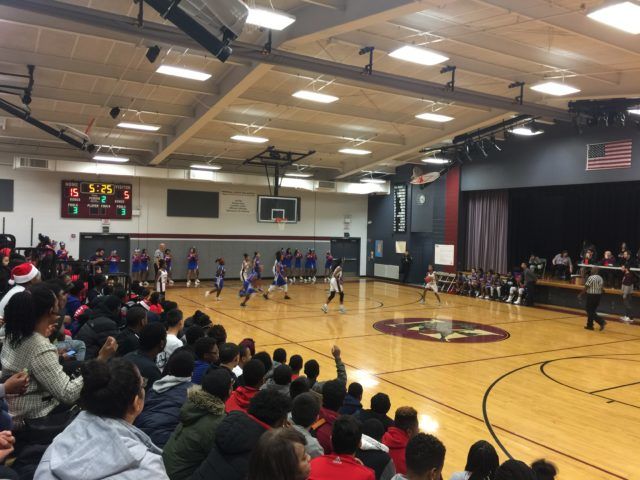 LANSING, Ill. (December 20, 2018) – The gym at Memorial Junior High School was rocking on Monday afternoon as the Memorial Mustangs faced off against the Heritage Middle School Nationals in their annual crosstown basketball match-up.

Despite being the only two middle schools in Lansing and having a strong rivalry, Memorial and Heritage are in different districts and athletic conferences. Lansing police officer Wilson Pierce noticed animosity between students from the two middle schools while he served as a juvenile detective at TF South High School years ago.

Pierce reached out to both middle schools in an effort to set up a healthy way for students to participate in the crosstown rivalry. For the last seven years, the Memorial vs. Heritage basketball games have done just that.

For the first two years, the game included only the boys teams, but for the last five, the event has featured both the boys and girls eighth grade teams. The Memorial girls have won all of their contests with Heritage while the Heritage boys have claimed two of their seven matchups with the Mustangs.

On Monday, both Memorial teams took home crosstown trophies. The girls won handily 47-19 while the boys secured a 49-33 victory.

To learn more about Officer Pierce and his foundation HOME, visit https://helpingourminorsexcel.org