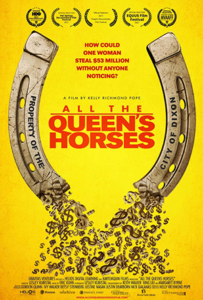 LANSING, Ill. (December 13, 2018) – On December 11 the Village of Lansing held an open meeting to view the documentary All the Queen’s Horses and discuss it afterward. The meeting functioned as an internal training class, with an inside peek into the Village’s financial processes.

The documentary explored the largest municipal fraud in U.S. history. Rita Crundwell, comptroller of small town Dixon, Illinois, stole $53 million from public coffers over 20 years. The narrative forms a cautionary tale of misplaced trust and concentration of power within a single office—and a single person. Crundwell was able to steal the money because there was no system of checks and balances to stop her. The bank which cleared her withdrawals, and the city’s independent auditor—who was also Crundwell’s personal accountant—never acted to reveal the theft. Both the bank and auditor were sued and settled with the city of Dixon.

Crundwell’s estate was liquidated, but much of the money was unrecoverable. Citizens of Dixon threw out the Commission form of government that presided over the fraud and replaced it with a managerial form of government, removing day-to-day operations from the reach of elected or appointed officials. (Crundwell had been appointed to her position by the mayor.) She is currently in prison with a release date in 2030.

Village of Lansing Treasurer Arlette Frye led the discussion following the documentary, which focused on best practices to maintain the transparency and accountability that safeguard the Village’s finances and the public trust. These practices are applicable to any business or organization, and could be integrated into new-staff orientation and reinforced with periodic staff refreshers.

Frye’s hope is that viewing and discussing the documentary together would help staff and Trustees know what kinds of things to look for in a municipal financial statement and what kinds of questions to ask. The discussion on Tuesday included the following points:

All the Queen’s Horses can be viewed on Netflix, Amazon Prime, and iTunes.

The next scheduled meeting of the Village of Lansing Board of Trustees is Tuesday, December 18, 7:00pm, in the courtroom at the Lansing Police Department—2710 E 170th Street in Lansing, Illinois.