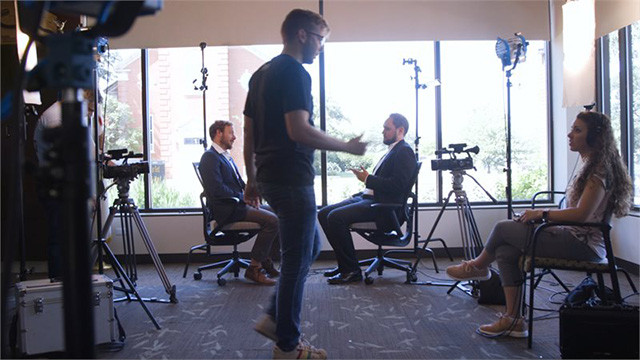 LANSING, Ill. (December 3, 2018) – In today’s world, video is an effective way to spread ideas and information among communities. But many villages and towns across the country do not have the desire, expertise, and opportunity to create compelling video content.

In Lansing, we do.

The Lansing Neighborhood Network (LNN) is a Village-operated video production group that creates high-quality programming about Lansing events and people for Lansing’s public television channel and the LNN YouTube channel.

With only five staff members, LNN has achieved great success covering an array of Lansing interests, and their work has attracted outside businesses and municipalities. LNN recently opened itself up to doing video production work outside of Lansing in an effort to raise money for the Village.

The Network has greatly evolved since it started in 1999, and it has distinguished itself from the programming and content created by many other villages and towns.

“If you were to look at other municipalities that have cable access channels, they’re still looking at it through the lens of the 1970s and 80s,” said LNN executive producer Fabian Newman. “We wanted to show content that was refreshing, and uplifting, and exciting and got people really involved in their community.”

Instead of showing board meetings and other government-related content, LNN is focused on community-related topics. According to its website, LNN’s mission is to “provide the technical resources and support needed for the residents of Lansing to inform each other and be informed about people and events in their neighborhood.”

The network has created videos for many different occasions, including Autumn Fest, the Evening of Thanks, high school functions, sports games, and library events. It also features regular programs such as “This Week in Lansing”—a weekly roundup of noteworthy happenings in Lansing, “Inside Lansing”—a monthly interview with a noteworthy person related to Lansing, and “Open for Business”—an occasional in-depth look at a local business.

Recently, LNN has teamed up with the Lansing Police Department to create an instructional video for TF South students explaining best practices for police interactions. The video will be used during the 2019 spring semester.

“What people have loved about LNN is that they know it’s all homegrown,” explained Newman, “You can see pictures of Neil holding a camera at 15, and now he’s [on LNN’s staff]…and it’s cool to be able to see that kind of stuff.”

The cultivation of LNN’s talented staff prompted the network to pursue opportunities outside Lansing, creating content for businesses and other municipalities to provide revenue for the Village. LNN signed its first contract one month ago.

“LNN is here to help people who have a voice but don’t know how to tell their story…. We’re here to let others know the great things that are going on,” Newman said.

Individuals interested in hiring LNN or volunteering at the network can visit www.lnnchannel4.com.

LNN’s Lansing-related content can be viewed on Comcast channel 4 and ATT channel 99. A weekly programming schedule is available on LNN’s website. Videos can also be accessed on the network’s YouTube channel, “VillageofLansing Illinois.”