LANSING, Ill. (December 9, 2018) – “Good Morning CPA Class of 2018,” read the email from Lt. Scott Bailey of the Lansing Police Department. He was reaching out to the 25 Lansing residents who had graduated from the most recent Citizens Police Academy. It was the largest class ever enrolled, and Bailey would like to see that trend continue. “If you know anyone that might be interested in the 2019 Citizen Police Academy, please have them register,” he told the group.

The Lansing Police Department has offered a Citizens Police Academy since the early 2000s, and Bailey brings a collaborative, relationship-building spirit to the nine-week class. He considers the class an opportunity to enhance relationships between Lansing police and the general Lansing community. “It’s the police and the citizens together who make up a community,” he said last year. “We want to educate the community about how we serve them.”

Members of the Class of 2018 found themselves learning about each other as well as the police, and a number of new friendships were formed. At least two class members went on to apply for Lansing’s Human Relations Commission, partly because the Academy inspired them to be more involved in their community.

Bailey hopes the upcoming class will be representative of Lansing, in terms of race, age, and experience. Classes are often interactive, and having a variety of participants makes the discussion more meaningful.

Throughout the nine weeks, class participants will learn about Police Ethics, Crime Scene Processing, Criminal Law and Procedure, Use of Force, Drug Use, and Canine Demonstrations. Lt. Bailey will do some of the teaching, but he will also bring in guest experts on many of the topics.

The academy is open only to Lansing residents, though enrollment may be extended outside of Lansing if room in the class is available.

The classes are free, and a background check is done on all enrollees.

The upcoming Lansing Citizen’s Police Academy will run on Wednesdays, January 16–March 20, from 7:00–9:30pm. The classroom can accommodate about 30 students. The Lansing Police Department likes to have at least 15 enrolled in order to invest staff time in the program.

Classes are held at the Lansing Police Department, 2710 170th Street in Lansing. Contact Lt. Scott Bailey for more information or to enroll: 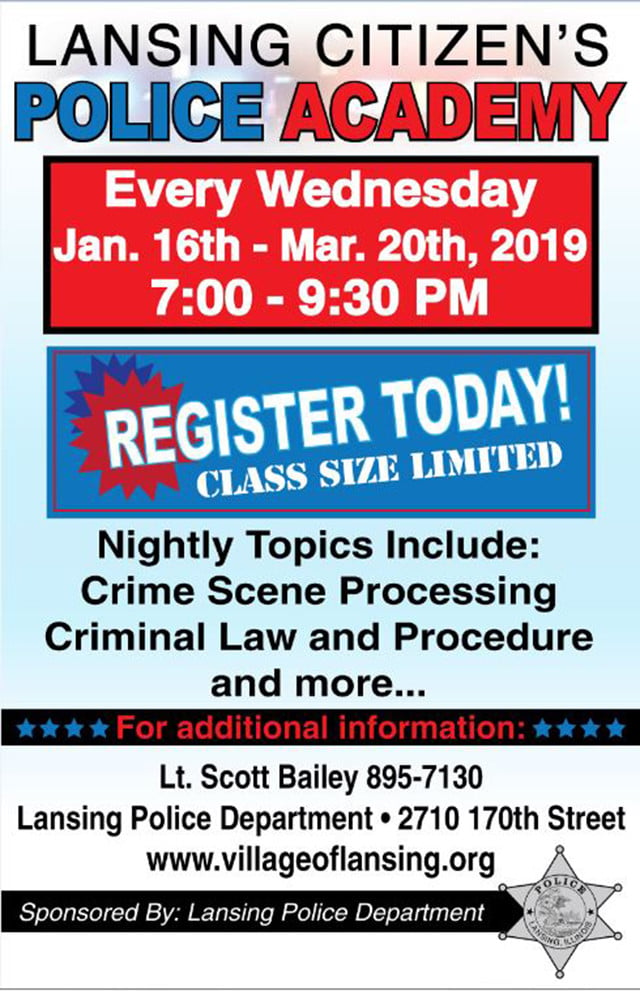