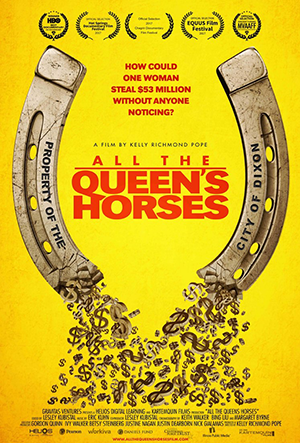 LANSING, Ill. (December 8, 2018) – “HOW COULD ONE WOMAN STEAL $53 MILLION WITHOUT ANYONE NOTICING?” asks the promo for All the Queen’s Horses, a documentary released in 2017. The film explores the exploits of Rita Crundwell, city comptroller of Dixon, Illinois, a town about half the size of Lansing and about 120 miles west. Crundwell managed to steal $53 million in public funds over the course of 20 years as a municipal employee. She was arrested in 2012.

“If fraud of this magnitude is happening in Dixon, it can happen anywhere,” claims Kelly Richmond Pope, director of the film. Toward the end of the 70-minute documentary she interviews Paula Meyer, Dixon’s current Finance Director, who was hired after the Crundwell incident and came in to reorganize Dixon’s financial structure. “I don’t believe that how Dixon’s finances were structured is probably very different from many—maybe even a majority of other small towns,” warns Meyer. “What Rita did isn’t particularly unique. The only thing that makes her unique is the dollar amount that she took. What she did is very, very common and could be done by almost anybody in any size organization.”

Lansing’s Village Treasurer Arlette Frye saw the documentary when it came out in 2017. She wondered if it could be instructional for Village officials and employees, so she suggested holding a viewing of the film. That viewing will happen Tuesday, December 11, at 6:30pm, in the classroom at the Lansing Police Department.

The viewing is considered a public meeting and is subject to the requirements of the Open Meetings Act. Public notice has been given, and the public is invited to attend the viewing and observe the discussion that will follow. But Frye is hoping that any public participation will not hamper the training. She is planning to have sample documents available, so she can show Trustees and other Village employees what kinds of things they should be looking for and what kinds of questions they should be asking. It is common for Board packets, which might contain dozens of pages of financial information, to be overwhelming to officials who are unfamiliar with municipal budgeting. Frye wants to alleviate that overwhelm and encourage proactive involvement.

In fact, Frye believes the documentary could be instructive for any member of the Lansing public, and she encourages people to rent and view it. All the Queen’s Horses is available on Netflix, Amazon, and iTunes.

Executive Assistant Ken Reynolds organized the viewing and made the arrangements. He expressed appreciation for Treasurer Frye’s creative efforts to ensure that Lansing never suffers the same kind of fraud that Dixon did. All the Queen’s Horses points out that smaller municipal governments are inherently more vulnerable because the personal relationships within a small-town setting lead people to trust each other without asking questions.

By inviting the Trustees, Mayor Eidam, Village Administrator Podgorski, the Village Accountant, all department heads, and any “key employees and elected officials involved in money handling and budget preparation,” both Reynolds and Frye are hoping to raise awareness of protocols and systems that are designed to prevent fraud. They are hoping for a healthy discussion of the existing fiscal management procedures within the Village.

As Meyer suggests, “The people that you have involved—your council members, your elected officials, even other people who are employed there—I think it would behoove them to really actually understand accounting, understand financial statements, so that they can look at them and read the story that they tell. Financial statements are really out there to tell a story.”

The Lansing Police Department is located at 2710 E 170th Street in Lansing, Illinois. The meeting will begin in the classroom (not the courtroom) at 6:30pm.