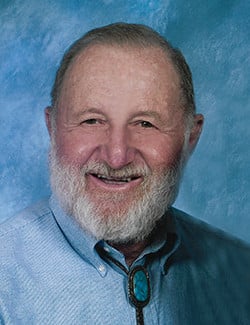 James William Pennington, 85, of Mount Vernon, Illinois, passed away at 12:33pm December 4, 2018, at Mount Vernon Healthcare Center. He was born January 4, 1933, in Chicago, Illinois, to the late James Dewey and Leah Lona (Thomas) Pennington. James married Edna May (Johnson) Pennington on June 14, 1957, in Elmhurst, Illinois. They were blessed with 61 years of marriage.

James was preceded in death by his parents and son, William James Pennington.

James graduated from Wheaton College in Wheaton, Illinois, from the ROTC program. He then served in the United States Army, achieving the rank of Lieutenant. He was a science and math teacher for junior high schools. In 1962, he earned a Master’s degree from Washington University in Saint Louis, Missouri. Upon retirement after 31 years of teaching, Jim and Edna moved to Mount Vernon, where he became a farmer and built the family home himself. James was a member of Logan Street Baptist Church. He was very active in sports, including volleyball and golf. James was dearly loved and will be missed by all who knew him.