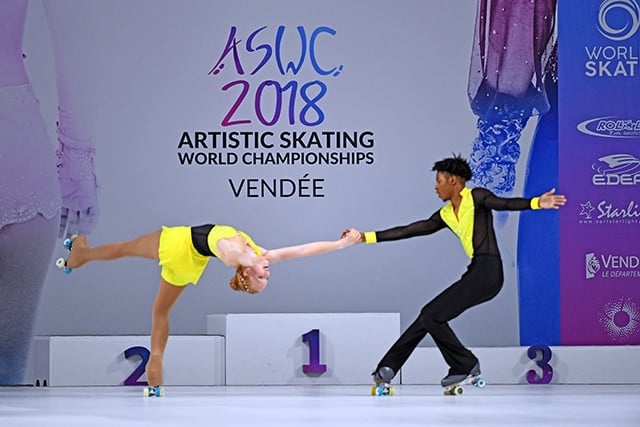 LANSING, Ill. (December 4, 2018) – You’ve got to really love something to practice it six or seven days a week for 2–3 hours a day. That’s what 14-year-old Sami Krusza does. Her passion is roller skating. Krusza’s coach, Julie Jessup, says, “She loves skating probably more than anyone I’ve ever taught.”

Krusza was just three years old when she began skating. As soon as she laced up and watched some of the older girls skating, she was hooked. “She started in classes and saw the big girls and wanted to compete,” said Jessup. “The first lesson I gave her was 7 minutes—and she competed the next day.” She was four.

Her best year yet

Krusza has continued to compete each year since. She has competed in individual, pairs, and quartet categories. This year was her best yet.

This was her fifth year of competing in pairs with her partner, Darius Sanders, 16, of Chicago. This year the duo advanced from the Great Lakes Regionals in June in Appleton, Wisconsin, to the National competition in Lincoln, Nebraska, in July. Krusza competed in eight categories at Nationals and earned six medals—four gold and two bronze. She and Sanders earned two of those gold medals as a pair. The pair are four-time U.S. National Skating Champions.

Their success at Nationals secured them a spot at the Artistic World Skating Championships in La Vendee, France, in October. They skated before a sold-out crowd with more than 1,000 skaters from 32 countries competing. It was Krusza’s first trip out of the county. “It was just such an amazing experience, just out of this world,” she said. The pair made it to the final round where they finished fourth.

Everything but the ice

Although a lot of the training and the moves are the same, roller skating doesn’t get quite the recognition that ice skating does. According to Jessup, the skaters are really doing the same thing, but the sport just doesn’t have the Olympic backing, so it doesn’t generate the same interest from the public. There are only four other roller skating rinks in the area that have competitions.

As similar as the sports are, it’s quite a different feel. As confident as Krusza is in the roller rink, she admitted that she found it difficult to ice skate when she tried it. Jessup said roller skaters are working with heavier skates than ice skaters.

Krusza’s interest in roller skating came from all the time she spent at Lynwood Roller Rink as a youngster, where her mother, Sue Krusza, taught lessons. She looks forward to many more years of competing. Junior competitions go up to age 18, and at that time she can then transition to the senior competitions where she would skate against other adults.

She and Sanders will have two more years to compete together as a juniors pair before Sanders turns 18 and they will have to move to the senior division. They already have their sights on another world competition and hope to advance to the 2019 Artistic World Skating Championships next July in Barcelona.

Jessup, who also coaches 12 other skaters, said they are in need of sponsors to help pay for expenses as the skaters advance. “We hope we can find some sponsors who love what they are doing and who can help pay for travel, lessons, and outfits,” she said. Donations to the non-profit skate club would be tax-deductible.

For more information about competitive roller skating, or to support the Lynwood Skate Club, contact Jessup at [email protected].