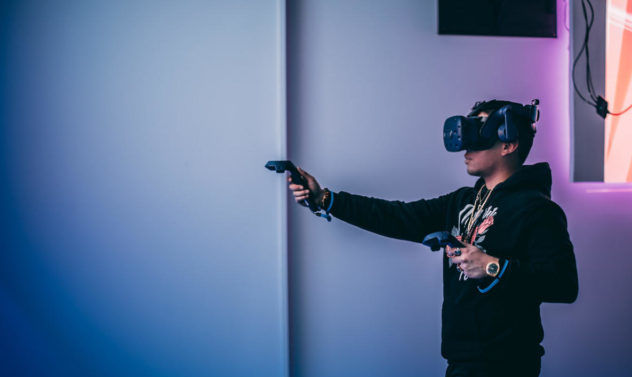 Located at 2416 176th Street, the lounge allows users to engage in a technology experience that has grown popular in the last decade.

The lounge is owned by Nadeem Khan, who has been a business owner in Lansing for 20 years. Nadeem’s son Nabbil provided the technical expertise required to create the lounge, and he inspired his father to open the business.

“[Nabbil] took me to a VR place in Malaysia, and when I experienced it, I thought it was a great business,” Nadeem said.

Virtual reality (commonly known as “VR”) has increased in popularity in recent years as tech companies have found ways to make it easily accessible to consumers. To experience virtual reality, a user stands in an open space and puts on a headset over his or her eyes. The headset contains a screen that responds to the person’s movement.

For example, a popular application used with virtual reality is Google Earth, which allows users to “visit” nearly anywhere in the world. When the user turns his or her head to look left, the high-definition screen turns left as well, giving the illusion that the user is actually standing in the street looking around.

This same concept is used for games, which require the use of headphones and a controller in each hand. Like the headset, the controllers respond to movement, allowing a user to wield swords, cast spells, throw a punch, cast a fishing line, shoot a bow, and much more, depending on which game he or she is playing.

Of Gamma VR’s 200-plus games, Nabbil’s favorite is a strategy-driven one that he enjoys playing with a friend. Gamma VR is currently capable of putting four people into the same virtual world at the same time. They also plan to expand to allow for more players.

“Not only can you experience VR, but if you come in with a group of friends, all of you [can be] in the same virtual environment, and you can see each other in the game,” Nabbil said.

The Khans hope that this “multi-player” aspect of the game will draw large groups to visit their lounge, such as parties, corporate events, and other groups.

To this end, in front of every playing area (a roughly 10’x10’ square) a large screen is in place that allows a spectator to see exactly what the user is seeing, and not, as Nabbil said, “just sit there and wait their turn.”

Nabbil Khan recently started a company called Farabi VR, the focus of which is to use virtual reality for education purposes.

According to Nabbil, virtual reality can use multiple applications to aid educators in the areas of geography, design, film-making, architecture, and training videos.

Months in the making

Nadeem Khan had planned to open Gamma VR Lounge in Lansing months ago, but was unable to do so because of Lansing’s limits on “indoor amusement” businesses. While going through the process of obtaining a special use permit, Gamma VR opened a location in Joliet where the process moved quickly.

Despite the delay, both Nadeem and Nabbil are grateful to Lansing for its interest and help in bringing the Gamma VR dream into reality. Multiple Lansing representatives have visited Gamma VR, including Planning and Zoning Board chairman Saad Abbasy and Village Administrator Dan Podgorski.

“They actually tried it out to get familiar with it,” said Nabbil, “They made sure they did their due diligence of being well informed and making sure everything was good, and we really value that.”

Gamma VR Lounge opened on November 9, and they offered a free trial to walk-ins on that day. Open hours for the lounge are 2:00pm–12:00am every day of the week except Monday. For multi-player sessions, the lounge will charge $10 per person for a half hour and $20 per person for an hour.

Gamma VR Lounge is located at 2416 176th Street, and has an entrance on the south side of the building which it shares with two other businesses—We Fix Phones and Accessories for Tablets.

Gamma VR’s website is www.gammavr.com, and they can be contacted via email at [email protected].