LANSING, Ill. (November 22, 2018) – Last week Wednesday, a starting pitcher walked into Guaranteed Rate Field, the home of the White Sox, and committed to playing baseball for the next four years. But the pitcher wasn’t a major league baseball player—he was 19-year-old Lansing resident Nic Vitiritti.

Along with nearly 20 other young men, Vitiritti participated in the “ACE Signing Day Ceremony,” an annual event held at Guaranteed Rate Field where participants in the Amateur City Elite (ACE) baseball program commit to playing baseball for colleges across the country.

Vitiritti, who is in his senior year at Mount Carmel High School, signed to play for Carthage College, an NCAA Division Three school in Kenosha, Wisconsin.

“It was pretty unreal,” said Vitiritti, reflecting on the event, “It makes you feel almost like a pro.”

“He talked with us…and he made us feel like we’re not just littler baseball players. It was a special feeling,” Vitiritti said.

The ACE program is run by the White Sox and allows players 12 to 18 years old to play baseball outside of normal school leagues, granting them opportunities to travel around the country with their team.

“My parents and two older brothers have been supportive of me and baseball all my life,” explained Vitiritti, “and this year especially, trying to find a college.”

On the ball diamond, Vitiritti’s accomplishments are impressive. The lean right-hander is capable of pitching a fastball up to 87 miles per hour, and threw a no-hitter in August during an ACE game in Ohio. He’s also likely to be an important part of Mount Carmel’s 2019 season, according to head coach Brian Hurry.

“The key for us is knowing which pitchers are going to step up and give us a chance to win…and we think Nic is going to be one of those guys,” Hurry said, “and he has all the [leadership] characteristics that can lead us to a championship season.”

Although he’s proud of his accomplishments on the diamond, Vitiritti is just as proud of what he’s overcome to make it to the plate.

At 4 years old, Vitiritti was diagnosed with Type 1 diabetes, a disease which could easily have kept him from playing baseball as actively as he has. Instead, he says, living with the disease has opened opportunities to push himself, saying, “Having a disability or a disease doesn’t have to stop you. You can still be just as successful.”

As an accomplished athlete, Vitiritti has used his condition to “mentor others,” talking to other diabetics at his school and annually attending “Slam Dunk for Diabetes,” a three-day basketball camp where he interacts with diabetic youth.

“[Diabetes] really hasn’t affected me negatively. I’m open to it—I tell people about it all the time. I use it to push myself and mentor others…and keep them positive,” Vitiritti said.

Moving forward, Vitiritti is excited to play baseball at Carthage college, and is both optimistic and realistic about his future as a ballplayer.

“I want to play baseball until I can’t do it anymore,” he said.

Eventually, Vitiritti wants to become an architect and open his own firm.

At 17 years of age, the lifelong Lansing resident is already remarkable, and there’s no telling what he might be able to do in the years to come, on and off the pitcher’s mound. 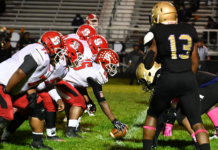