A how-to guide for parents, from an experienced Santa

by Melanie Jongsma, with Stewart Scott

LANSING, Ill. (November 26, 2018) – Christmas is quickly approaching, and families with young children will be anxious to take their children to see Santa Claus. It’s an age-old tradition. But without the right preparation, the magical encounter could be a disaster. Take it from Stewart Scott, a veteran Santa Claus with more than 10 years of experience.

“Before my first Santa assignment with Lincoln Mall in 2007, I asked if I would need special training,” Scott said. “I always wanted to play the role of Santa, but I had no idea what to expect. The only advice I received was, ‘Don’t promise anyone anything you can’t deliver, keep both hands visible at all times, and watch out for teenagers.’ The first day on the job, the mall was bustling with children and their parents. I loved every minute. I felt like I was born to be Santa Claus.” 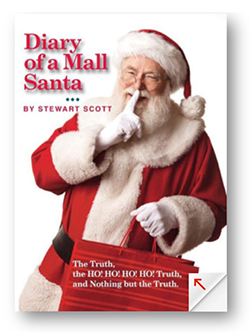 Scott found his encounters with children, their parents, and some adult visitors so enlightening and often entertaining that he wrote a book about his experiences. Diary of a Mall Santa is available through Amazon and Barnes & Noble. That book includes the following tips and more:

Additional dos and don’ts are included near the back of Diary of a Mall Santa, and Scott hopes they are helpful as families prepare children or grandchildren for the magical experience. “You don’t want your child to be screaming and crying for the once-a-year keepsake picture with Santa,” says Scott. “And Santa doesn’t want that either.”