Stella Hoyt talks about theater, family, and her upcoming role in Miracle on 34th Street: the Musical

MUNSTER, Ind. (November 10, 2018) – “You just have to start. And then—keep going.” This is the advice that Stella Hoyt has for kids who want to get into theater, but it might just as well apply to any area of life. At the age of 11, Hoyt has already learned that hard work and persistence will take you farther than talent will. “It doesn’t just come to you,” she says about singing, or acting, or opportunity. “You have to keep working.”

Hoyt is playing the role of Susan in Miracle on 34th Street: the Musical, which opens at Munster’s Theatre at the Center on November 18. She did watch parts of the beloved Christmas film the musical is based on, which featured a young Natalie Wood in the role of Susan. Maureen O’Hara as Doris Walker, John Payne as Fred Gailey, and Edmund Gwenn as Santa helped the 1947 film win three Academy Awards and become a family favorite.

For Theatre at the Center’s rendition, Hoyt will be joined onstage by Courtney Jones as Doris, Christopher Kale Jones as Fred, and Neil Friedman as Santa. The musical will be directed by Linda Fortunato, who is “just really nice and fun to work with,” according to Hoyt. Hoyt believes Fortunato is skilled at getting the best out of people without ever being mean or overly demanding. “She wants things to be the best they can, but not to the point where you don’t want to work with her,” Hoyt explains.

Hoyt appreciates the Munster theater venue—“It’s just a great place to be. You get to meet so many cool people, and it’s just a fun theater.” She has also been onstage at Victory Gardens, Mercury Theatre, and Oak Lawn Theatre, and she’s planning to try out for the spring musical at her school, Clark Middle School, in St. John, Indiana.

Theater is not Hoyt’s only interest. Though the two weeks leading up to an opening night include long days of school followed by hours of rehearsal, she is intentional about creating a young version of work/life balance. She plays with Barbies, hosts sleepovers with friends, and spends time coloring, drawing, and writing stories.

In fact, she’s not even sure that she’ll end up choosing theater as a career, understanding already how difficult it is to really make a living on stage. Her career choice right now is to be a vet, and she sees herself doing theater on the side. “There are other things I love to do,” she says. “I do want to be a vet. But I’ll always love theater.”

Hoyt comes from a long line of theater lovers. Her grandmother, Cyndy Falica, remembers that her grandmother, Hilda Koss, took her to children’s shows at Drury Lane Theater when it was in Evergreen Park. Falica’s daughter (Stella Hoyt’s mom), Meghan Hoyt, began auditioning and acting at age 5. Falica quit her job to drive Meghan to auditions, rehearsals, and performances, and now she’s doing the same for Stella. “We all love it,” she says.

Occasionally this family of theater people even gets to practice their craft together. Recently Meghan Hoyt won the lead role in Mary Poppins, and Stella and her brother Cooper (who has also begun acting) played Jane and Michael.

“It’s just a really fun play,” says Hoyt about Miracle on 34th Street. She wants people to see it because, well, “You’re gonna love it. It’s just a great story.” Hoyt appreciates that the character of Susan evaluates her beliefs according to her own knowledge and doesn’t blindly follow what other people tell her to believe. Nonetheless, Hoyt does feel that audience members should believe in Santa Claus before seeing the show in order to get the most out of it.

Director Linda Fortunato has said, “The story of the real Kris Kringle hired as Macy’s Santa Claus still touches hearts and reminds us of the power of the imagination. I am excited to share this classic story in musical form with audiences of all ages. From the littlest believers to those who may have lost sight of the magic of Christmas, this musical brightens the holiday season for all.”

Previews of Miracle on 34th Street: the Musical begin November 15 with Opening Night on November 18 and a continued run through December 23. This production is sponsored in part by American Community Bank. Performances are:

Individual ticket prices range from $42–$46. To purchase individual tickets, call the Box Office at 219-836-3255 or Tickets.com at 800-511-1532. Group discounts are available for groups of 11 or more.
Theatre at the Center is located at 1040 Ridge Road in Munster, Indiana. For more information, visit www.TheatreAtTheCenter.com. 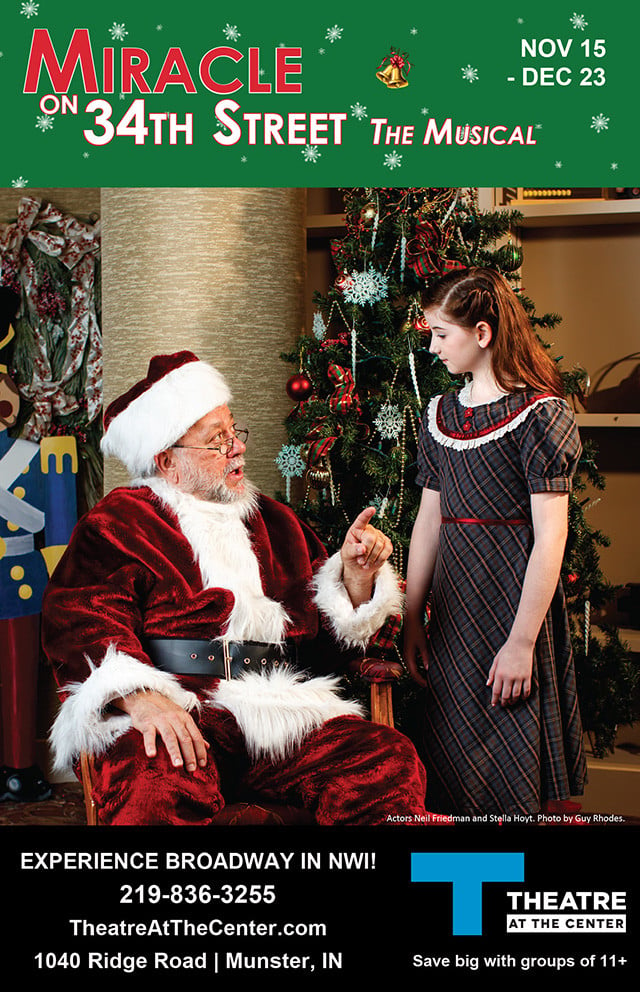