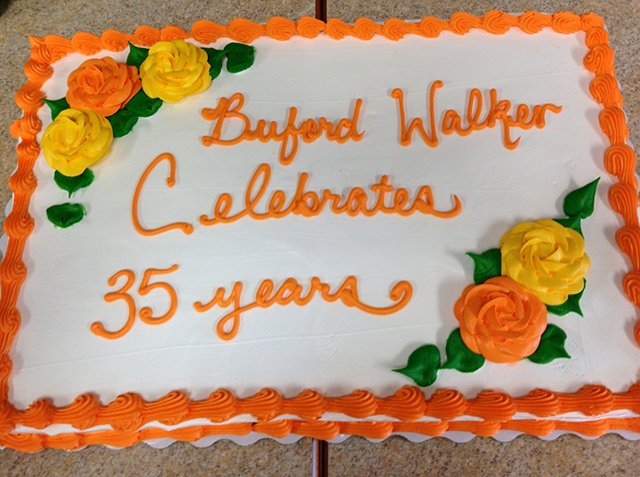 Cake and speeches and honor the legacy of Buford Walker

LANSING, Ill. (October 30, 2018) – In the community room at Buford Walker Senior Housing, residents, staff, Buford Walker Board members, and members of the public gathered on Friday, October 26, to mark an anniversary. It was 35 years ago that the senior housing community welcomed its first residents.

The history of Lansing’s Buford Walker Senior Housing began years before the development’s opening in 1983. Buford Walker—the man for whom the residence is named—was a Lansing resident and head of the village’s senior housing organization. Walker was a dedicated advocate for senior housing in Lansing, and he worked closely with another advocate, Scott Schultz, assistant to past Illinois House Representative George O’Brien.

The Village of Lansing had been seeking approval from Housing and Urban Development (HUD), and finally in 1981 HUD gave 9 approvals, three of which were to Chicago suburbs: Schaumburg, Evanston, and Lansing; federal funds would be used to finance the Lansing senior housing development. The Village Board and then-Mayor of Lansing, Louis LaMaurie, announced that the building would be named Buford Walker Senior Housing, in honor of the efforts of Buford Walker. Unfortunately, Mr. Walker died before groundbreaking on October 27, 1982, but his wife Agnes served on the housing authority from 1982–1985. In 1983 the residence named in honor of her husband was opened for occupancy.

Though many of the individuals involved with the inception of Buford Walker Senior Housing have since passed on, it is interesting to note that Jackie Protsman, current owner of the Fashionette boutique in downtown Lansing, was the building’s first Board President. June Cole is currently serving as Board President.

Buford Walker Senior Housing is located at 17725 Arcadia Avenue in Lansing, and is managed by Lutheran Social Services of Illinois, a statewide, not-for-profit social service agency. LSSI serves people of all faiths and walks of life through an array of services at 89 program sites across Illinois. For more information, visit LSSI.org.