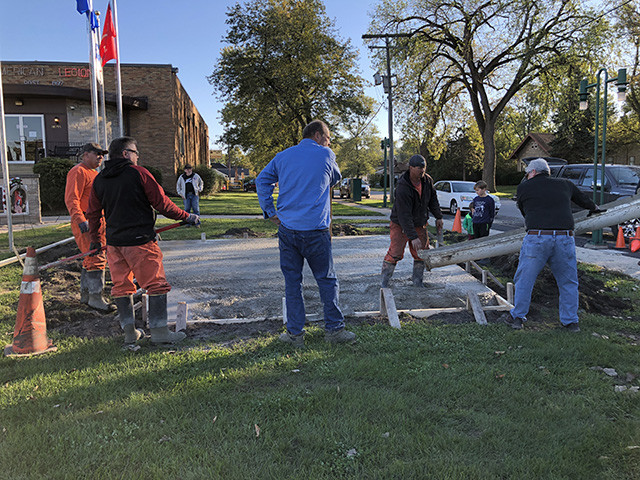 LANSING, Ill. (October 20, 2018) – “We do what we can,” said Valerie Miller. “Especially for veterans.” She’s the owner of Millers Ready Mix in South Chicago Heights, and one of her drivers is John Summit, a Legion Rider at Lansing’s American Legion Post 697. That connection led Miller to donate a truck full of Ready Mix so that the American Legion could have a new, larger concrete slab for the M5 gun displayed in front of their building. The M5 was completely refurbished this summer, and the veterans wanted to upgrade the display area before the gun is returned.

The Legion Riders worked to prepare the site and build the form, and on Thursday afternoon, October 18, a Millers Ready Mix truck rolled up with 6.5 yards of concrete.

Legion Rider Keith Miller (not related to the Ready Mix Millers) is a special projects coordinator at US Steel, and he brought a crew of concrete finishers from the masons department to pour, spread, screed, and float the concrete. The men had agreed to volunteer their time, but US Steel chose to keep them on the clock and compensate them for the work. Miller said he chose the best for this special project: Joe Bishop, Robert Wright, Bill Walzak, and Theodore Tuscan.

From first pour to final float, the job took about an hour:

With the concrete pad in place, further plans include surrounding the pad and the gun with ironwork. Former Post Commander Ron Line, who is serving as point man for the restoration project, would also like to include a story board with educational information about the gun and tributes to donors who helped cover the cost of refurbishing it.

A dedication ceremony for the refurbished M5 is being planned for Veterans Day, Sunday, November 11.