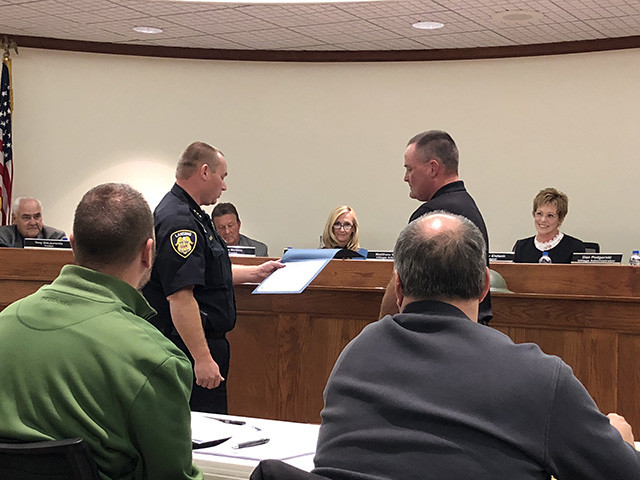 LANSING, Ill. (October 18, 2018) – The Village Board meeting on October 16 included a special presentation by Police Chief Dennis Murrin in recognition of Detective Tony Curtis. Curtis had been involved in an investigation of a series of wire thefts that began in northwest Indiana and then drifted into Lansing, costing communities and schools hundreds of thousands of dollars in damage.

Murrin read a letter from Ezequiel Hinojosa, Detective Captain of the Hammond Police Department, which said in part:

“As a result of the outstanding investigation initiated by Detective Tony Curtis, [the perpetrators] have been charged federally for their involvement in the wire thefts in Indiana and Illinois. I would further mention that it has been an honor to work with Detective Tony Curtis on this investigation, and his work is not only an outstanding reflection of himself but of the quality of work produced by the Lansing Police Department. I feel that excellent police work should not go unnoticed, as every officer strives on a daily basis to do the best for their community. Therefore I would like to commend Detective Tony Curtis for his work ethic and dedication to keeping the residents safe and the lights on in Cook County Illinois and Lake County Indiana.”

This Special Arrest Achievement is hereby awarded to Detective Tony Curtis for your outstanding efforts related to an underground wire theft investigation that began on September 9, 2018. The investigation involved numerous jurisdictions, including federal agents, and ultimately led to the confession and arrest of two suspects.

Both the Special Arrest Achievement and the letter from Captain Hinojosa will become part of Detective Curtis’ personnel file.