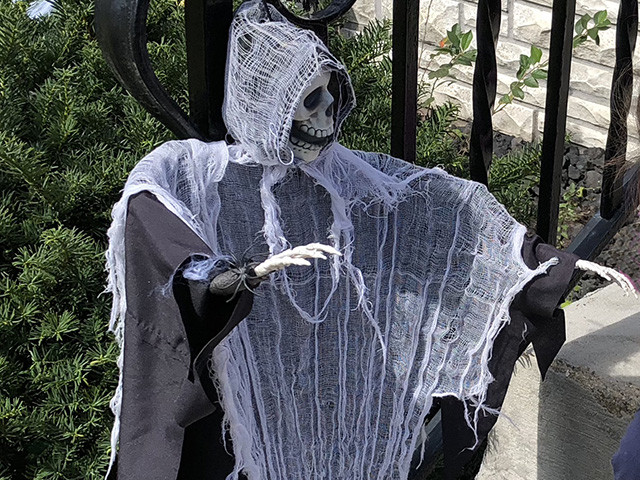 LANSING, Ill. (September 26, 2018) – Walter Morales loves Halloween. When he and his family lived in the city, they decorated in the Mexican “Day of the Dead”-style tradition—not pumpkins and fall leaves, but ghoulish corpses and skeletons. “It’s Halloween,” Morales explains. “We wanted to scare people. That’s what Halloween is!”

Having moved to Lansing two years ago, Morales and his wife Edith planned to continue those scary Halloween traditions in their Schultz Park neighborhood. “We love Halloween,” says Pam Peeples, who lives next door to the Morales family. Tomika Cooley—a neighbor down the street—agrees. “Our whole neighborhood goes ALL OUT for Halloween,” she says. “We ALL go all out for Halloween.”

The Morales family started early. Nearly three weeks ago scary decorations began appearing on the porch, in the bushes, all around the house. Using old clothes, masks, and garbage bags stuffed with cloth, Walter and Edith created life-sized dummies and positioned them to look like dead bodies. Peeples remembers that each time she saw a new Halloween corpse added to the collection, she had to do a double-take. “I was always like, ‘[Gasp] What happened to the neighbors?’—because they really did look real!” she laughs.

When Walter added a Halloween corpse to the tree in his parkway, the neighbors got a good scare again. “Every single day—even though I knew it was there—every time I saw that, it scared me!” says Peeples. And she’s quick to add, “Not because it was any kind of racist, just because it was scary! It’s Halloween, and that’s what he wanted—to scare people.”

The hanging dummy had a “Jason” mask on the garbage-bag face for a couple of days, but some neighborhood kids removed it. The unintended result was that the Halloween dummy took on the look of a hanging black man. When someone posted a photo on Facebook this morning, it was reminiscent of the old photos of lynchings that scar American history. Walter and Edith Morales had no idea that their cultural traditions of making light of death might suddenly be misinterpreted in the light of that history.

So when Edith looked out her door and saw a small crowd of people on her sidewalk snapping photos and shooting video, she wasn’t sure what was going on. “I came out, and everybody was yelling at me to take it down,” she says. “I told them and said no, because I didn’t mean it to be racial, and that was not my intention.” The sun was shining on her while people were recording, and many people—both live and on video—assumed she was a white woman, which added another layer of assumptions.

Edith called the police. The officers responded quickly, and the crowd remained civil. Police went into the house with Edith and explained that people had taken offense to the hanging Halloween dummy. Edith was confused, but she quickly agreed to let the officers remove the dummy. They did, and considered the matter resolved.

Later, possibly in response to misinformation continuing to spread, the Lansing Police Department issued a press release explaining, “Our investigation into this incident revealed no malicious intent and that this was simply a Halloween decoration that had been vandalized.”

The Morales’ neighbors—blacks as well as whites—feel bad that people who don’t know the Morales family jumped to conclusions and sensationalized the situation. Peeples noted that Edith was in tears and Walter was wondering what he could do to correct the assumptions that people were making about him.

“They’re nice people,” said Tamika Cooley, gesturing to the Morales home. “All someone had to do was just one-on-one knock on their door to find out the real story.” She herself had made certain assumptions about the Moraleses, but through conversations she was able to adjust her understanding.

“People just started assuming things,” says Edith. “It was a big misunderstanding. They didn’t bother to talk to me about it.”

Walter is hopeful that the social media assumptions won’t damage his relationships in his neighborhood. “My neighbors—they know me,” he says. “They know how I am.”

Peeples said someone asked her how her children felt, walking past the hanging dummy. In answering, she expressed a key to healthy race relations and healthy neighborhoods in Lansing: “It didn’t make them feel any kind of way—because they know their neighbors.”

What does Schultz Park want people to know about what happened? “We good,” says Cooley. “We good over here.”