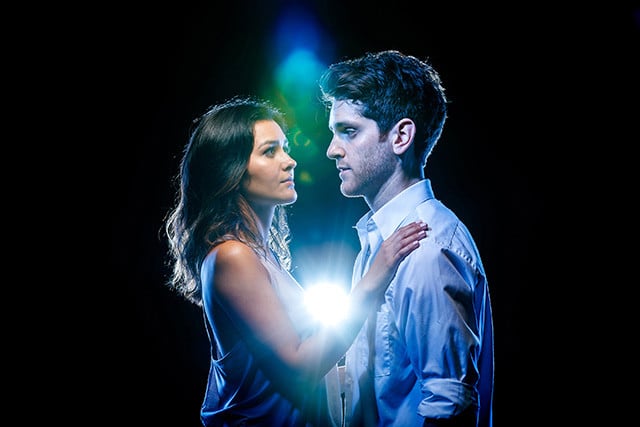 Playing at Munster’s Theatre at the Center through October 14

MUNSTER, Ind. (September 18, 2018) – In 1990, movie-goers swarmed to theaters to see Patrick Swayze, Demi Moore, and Whoopi Goldberg star in a film about romance, greed,and life after death. Directed by Jerry Zucker, the Best Picture-nominated Ghost claimed the top box office spot for five of the eight weeks after its release, and would earn Whoopi Goldberg an Oscar for best supporting actress.

In 2011, theatre-goers were treated to a musically-injected stage version of the romance-drama-fantasy thriller at the Manchester Opera House in England. Ghost the Musical quickly made its way to Broadway, earning three Tony nominations in 2012.

On Thursday, Munster’s Theatre at the Center opened its one-month run of Ghost the Musical, directed by Linda Fortunato. Having given only a handful of performances so far, the show has already been recognized as a candidate for a Jeff Award, a coveted prize for Chicagoland theater artists.

True to the plot of the original film, Ghost the Musical asks its audience to suspend disbelief and join it in taking an other-worldly look at love, loss, and the lengths to which we’ll go to satisfy our greed.

The play opens as Sam Wheat (played by Garrett Lutz) and Molly Jensen (Courtney Mack) move into their new home in New York. Ghost starts with an upbeat number (“Here Right Now”), one which frames Sam and Molly as a young and optimistic couple ready to start the next chapter of their lives.

Lutz, Mack, and Tony Carter (who plays Sam and Molly’s friend Carl) make a great team, and handily meet the significant vocal challenges the show demands. Only on rare occasions were they not locked in on a harmony, as they—and the cast as a whole—dazzled the audience while singing and dancing across the stage.

Soon after promising to spend “weeks and months and years…together,” Sam and Molly’s relationship is cut short when Sam is shot in a robbery-gone-wrong and becomes—you guessed it—a ghost. In a quick and well-executed transition, Sam stands over his own dead body and watches helplessly as Molly is overcome with grief.

The remainder of the musical chronicles Sam’s coming to terms with being dead, seeking to protect Molly from harm, and discovering that his death may not have been as accidental as he first thought.

Sam’s purgatorial premonitions lead him to employ the help of Oda Mae Brown (Donica Lynn), a swindling psychic who reluctantly serves as a mode of communication between Molly and Sam. Much like Whoopi Goldberg deserved an Oscar for her role as Oda Mae, so too does Lynn give an award-worthy performance. Stealing the show with her quick wit and snappy attitude, she joins with an ensemble to sing arguably the best number of the show, a rollicking gospel anthem titled “Are You a Believer?”

The acting of the cast as a whole is impressive, particularly as it relates to sharing the stage with a ghost. In the world of the play, Molly is looking at Oda Mae as Sam puts his invisible hand on hers. In the world of the actors, Mack must stare directly at Lutz’s face, inches from hers, as if she’s looking through him, and must move her hand and body as if there’s nothing in front of her. Unlike the film, only so much can be done from a makeup and effects perspective to make Lutz look like a ghost onstage, but the quality acting makes the Sam-is-an-invisible-apparition pill a little easier to swallow.

An appropriately ghoulish blue and white lighting scheme provides a good setting for the action, as does a scenic design that uses angles, levels, frames, and reflections to leave the audience to discover, along with Sam, what’s real and what’s illusory. The five-member orchestra plays with the ability of a group twice its size, and provides a flawless accompaniment to the well-acted drama onstage.

After a tear-jerking final song, Friday’s audience stood and applauded the fine work of the actors, orchestra, and crew. Variations of “Wow, that was excellent” and “They did a great job” bounced around the crowd as it made its way out of the thrust-style theatre.

It’s no surprise that Theatre at the Centre’s Ghost the Musical has already been recognized as a candidate for a Jeff Award, as it beautifully asks audiences to laugh hard, cry hard, and think hard about friendship, grief, perseverance, and love that transcends even death. And it does it through the most unlikely of means: a singing ghost.

Individual ticket prices range from $42-$46. To purchase individual tickets, call the Box Office at 219-836-3255 or Tickets.com at 800-511-1532. Group discounts are available for groups of 11 or more. Student tickets are $20 (not available for Sunday performances), and gift certificates are also available.

Theatre at the Center is located at 1040 Ridge Road in Munster, Indiana. For more information, visit www.TheatreAtTheCenter.com.