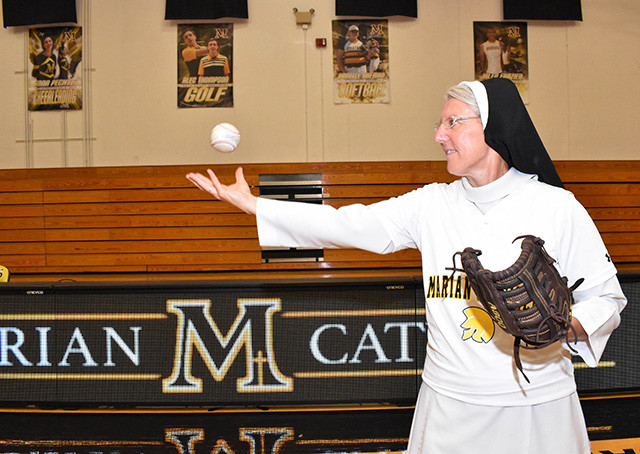 CHICAGO HEIGHTS, Ill. (August 21, 2018) – The Marian Catholic High School Band’s performance of the Star Spangled Banner opened Marian Catholic Night with the White Sox on Saturday, August 18, but it was only a prelude of what was to come. Shortly after the band left the field, Sr. Mary Jo Sobieck OP, who teaches sophomore and junior theology classes at the school, took to the top of the mound to throw out the first pitch of the game between the White Sox and the Kansas City Royals. The trajectory of her curve ball delivered it straight into the strike zone.

Growing up as one of 10 children in an active family, Sister Mary Jo has long had a love of sports. After graduating from Cathedral High School in St. Cloud, Minnesota in 1987, Sister Mary Jo played shortstop for the Vermillion Community College softball team in Ely, Minnesota, and center field for The College of St. Scholastica in Duluth.

When asked how she stayed calm before the pitch, Sister Mary Jo replied, “You just have to be yourself. Do your best and let God do the rest.” It is a message she shares with students on a regular basis.

Video of Sister Mary Jo’s pitch quickly went viral around the world, from Boston to Arizona, in Germany, Australia, and Japan. How does she handle her new fame? “My students at Marian Catholic make me feel famous every day.”