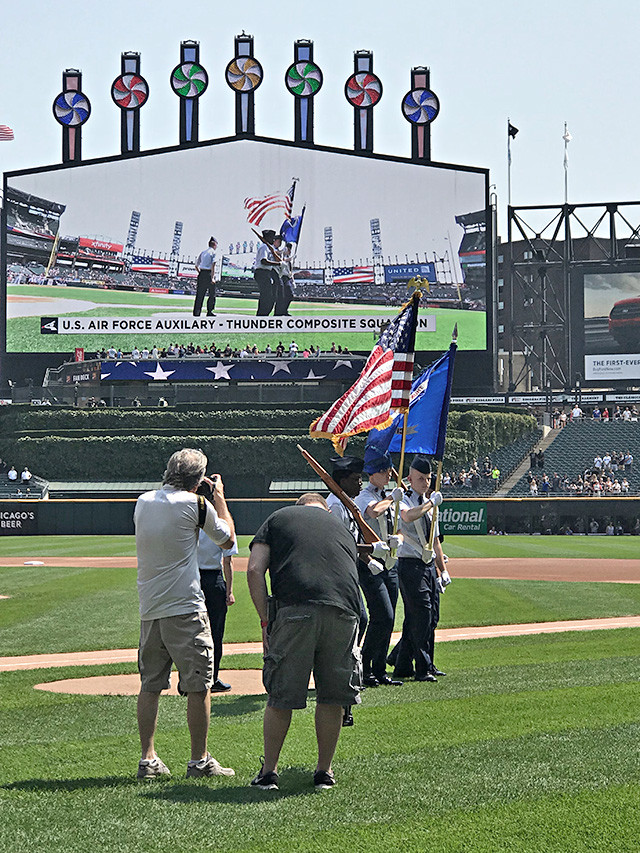 CHICAGO, Ill. (August 19, 2018) – Last Sunday, the color guard from Lansing’s Thunder Composite Squadron presented colors at the Chicago White Sox vs. Kansas City Royals game at Guaranteed Rate Field. The group was introduced before the singing of the national anthem and shown on the center field screen as they carried out the American flag and CAP flag.

The Civil Air Patrol (CAP), an auxiliary program of the United States Air Force, presents youths with a myriad of unique opportunities—going on orientation flights in small aircraft, meeting pilots and military personnel, and participating in community service assignments. Cadets involved with the color guard also have an opportunity to present colors at various parades, memorials, and other events.

“It was a bit nerve-wracking, but once it started it went smoothly,” said Cadet 2nd Lieutenant Lucas Vanderwoude, 16, of Lansing.

“I was kind of scared at first,” added Cadet Senior Airman Arjon Odom, 14, of Homewood. “But it wasn’t so bad. I enjoyed it.”

Despite the common theme of nervousness, it didn’t show as the cadets marched onto the field.

“When I first got out there, I was nervous, but the longer I was out there, the more excited I got,” said Cadet Chief Master Sergeant Jomareun Richardson, 16, of Lansing.

The White Sox game capped off an exciting weekend for the cadets. Thunder Composite Squadron also assisted with flight line security at Gary-Chicago Airport, where military and show aircraft were staged for the Chicago Air and Water Show.

Civil Air Patrol was founded in 1941 and continues today with youths and adults working in squadrons in their communities in a volunteer capacity. The program enables cadets to respond to emergency and relief efforts and promotes aviation and related fields through aerospace and STEM education.

More information about CAP is available at gocivilairpatrol.com. CAP’s Thunder Squadron IL-317 meets weekly at Heritage Middle School in Lansing on Wednesdays at 7:00pm. The squadron includes cadets from communities in the south suburbs and northwest Indiana. For squadron information and updates, follow “CAP Thunder Composite Squadron” on Facebook.