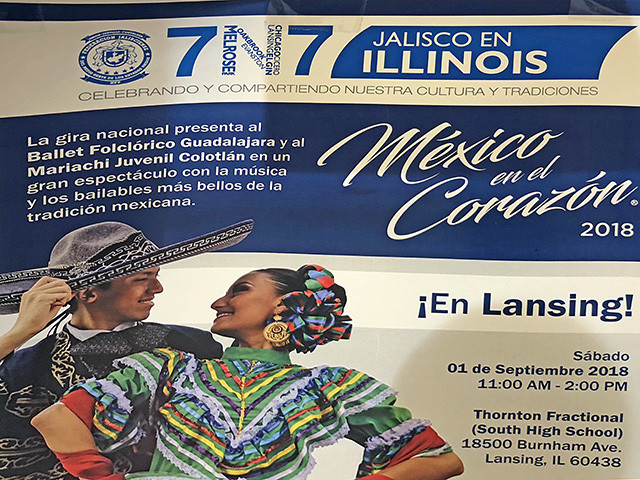 LANSING, Ill. (August 22, 2018) – It was a tight squeeze for last year’s crowd of about 700 people packed into the gym at Memorial Junior High School. So when the Mexican folk dancing troupe wanted to return this year, they hoped for a larger venue. This year, TF South High School (18500 Burnham) will host. The performance is free and open to the public.

Last year, Mayor Patty Eidam spoke words of welcome to the international performers, many of whom hailed from the Mexican state of Jalisco. This year, at the August 21 Board meeting, she made a proclamation recognizing Jalisco Week, which says, in part:

“Whereas the free and sovereign state of Jalisco Mexico includes the great city of Guadalajara and is home to more than 7.5 million people,
“and whereas Jalisco has made rich cultural contributions—not only to the country of Mexico, but also to the rest of the world and the communities throughout the Chicagoland metropolitan area,
“and whereas a great number of Jalisciense have traveled to the United States in pursuit of the American dream of life, liberty, and happiness, and an estimated 200,000 call Illinois their home,
“. . .now therefore I, Patricia Eidam, Mayor of the Village of Lansing, Illinois, on behalf of the Village of Lansing council and the Lansing community, recognize the contributions of the people of Jalisco….”

Jalisco Week is celebrated throughout the midwest, commonly in August or September, so the Mayor’s proclamation is a fitting lead-in to the Ballet Folklórico performance on September 1.

The performance officially begins at 11:00am. Last year, word-of-mouth enthusiasm attracted visitors from Lansing, Lynwood, Dyer, Schererville, and beyond, and they began lining up at the school doors an hour early.

TF South is located at 18500 Burnham in Lansing, Illinois. More information about the troupe’s touring schedule can be found at México en el Corazón 2018 on the website of the North American Institute for Mexican Advancement.