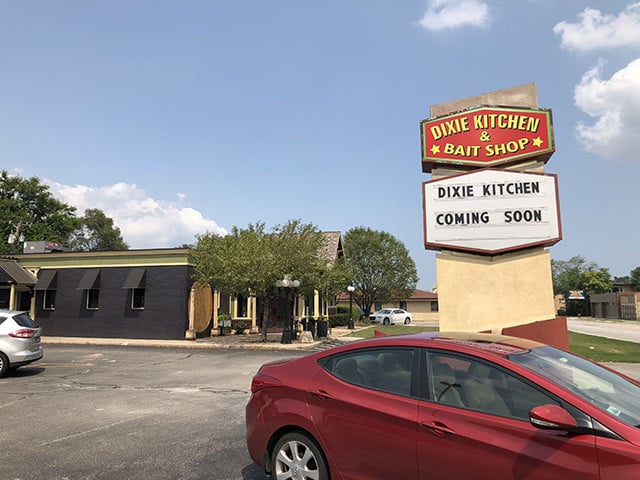 LANSING, Ill. (August 12, 2018) – Dixie Kitchen & Bait Shop will be opening at its new location on Tuesday, August 14, offering up all of their well-loved cajun and creole dishes in an updated setting in the building that housed the former Bohemian Joe’s restaurant at 17940 Torrence Avenue.

The original Dixie Kitchen location opened in Chicago’s South Side Hyde Park neighborhood in 1994, and it became known as a favorite of President Barack Obama. Then a state senator, Obama appeared on an episode of the PBS show “Check, Please!” in August 2001, where he said, “One of the things I like about this place is the prices are right and the portions are good.” He also mentioned his favorites—the Southern Sampler and the peach cobbler.

In 2002, Dixie Kitchen opened an additional location in Lansing and they’ve created quite a following. “We’re a destination location,” said General Manager Karyn Crowley. “Customers travel from afar after passing numerous other restaurants to seek out the famous food of Dixie Kitchen.”

The former location, which was located just off Torrence Avenue on the northern edge of Lansing, closed June 28, and Crowley said they gained access to the new location about a week later. Ever since then the phone has been ringing continuously and people have been driving up to try to place orders. “People just keep calling and showing up—and that says so much for our business,” she said. “We’re very excited and grateful for our regular guests who have supported us.”

Customers can expect to find the same menu items that they enjoyed in the old location, but the look will be a little different. Because it had been recently renovated, select pieces of decor were moved to the new restaurant. “We’ve hand-selected particular, authentic pieces, and continued the ambiance with a new flair,” said Crowley.

Among those popular menu items are southern favorites like gumbo, jambalaya, fried green tomatoes, oysters, okra, catfish, smothered pork chops, jerk chicken, po’ boys, fried jumbo shrimp, macaroni and cheese and barbecued ribs. For those who may be looking for something other than southern cuisine, the menu includes broiled salmon, pastas, and fresh, hand-formed burgers.

Crowley noted that there is a lot of variety and depth to the menu with interesting combinations of flavors. Everything is made in-house from scratch, including sauces, like the creole sauce for the oysters and the Montego sauce for the plantains.

Meals can be finished off with such scrumptious treats as peach cobbler, key lime pie, pecan pie, sweet potato pie, and a bread pudding with a homemade whiskey sauce. But to have room for dessert, Obama warned, you have to go easy on the Johnny Cakes, which Crowley described as “an old-fashioned hot water cornbread.” After customers are seated they are greeted with a complimentary basket of Johnny Cakes along with homemade honey butter.

The new location features a full service bar and you’ll find a number of specialty drinks on the menu. Also, keep in mind that a fried chicken special is available on Mondays for $9.95, which includes a half fried chicken and two homemade side dishes.