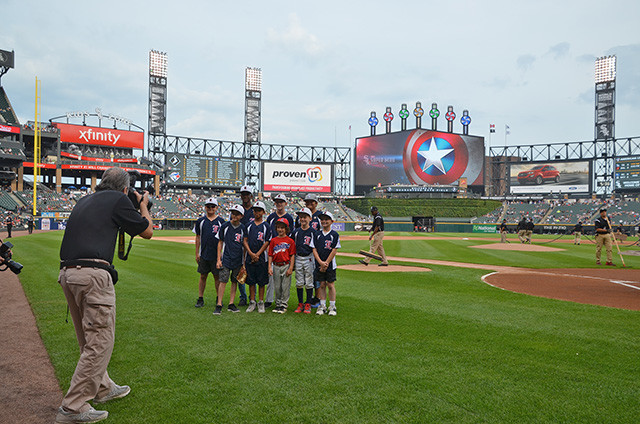 It was Village of Lansing Night at Guaranteed Rate Field, and nine youths from the Lansing Little League program had the opportunity to accompany White Sox players to their position before the start of the game. And, as a bit of icing on the cake, the opposing team was the Toronto Blue Jays, giving those youths a chance to see a former Lansing Little Leaguer in action. Toronto’s Curtis Granderson grew up in Lynwood, but played in Lansing’s Little League program and later graduated from TF South.

About 175 tickets were purchased through a discounted ticket promotion for Village of Lansing Night. From those who purchased tickets, nine youths were selected to take the field before the game and stand beside the position players during introductions. They each ran out clutching an official Major League Baseball, exiting the field with an autograph on it.

Additionally eight ticket purchasers from Lansing were able to get a photo on the field before the game. Dave and Jenn Neibert were two of them along with their four-year-old son, Matthew. Their sons, Josh, 7, and Nick, 10, were among the group of Little Leaguers who had a chance to go on the field. “They were very excited to get out there and see the players and go on the field,” said Jen.

About a half-hour before game time the group was led out a gate where they stood in foul territory near the White Sox dugout, getting an up-close view of the ceremonial first pitch and the singing of the American and Canadian National Anthems. As they made their way from the reception area, they were greeted with high-fives from Gail Tucker, Senior Director of Corporate Partnership Activation for the Chicago White Sox who declared herself “a proud TF South graduate.”

Melvin Lee, 11, who plays first base and pitches in the majors for Lansing Little League’s Lions Demolition team was all smiles as he waited for his big moment. “It’s great,” he said. When he learned he’d have a chance to be on the field before the game and meet one of the White Sox players, he said he was “very happy and surprised.”

Michael Bailey, 12, was setting foot on the diamond for his second time. He said he had the opportunity to be part of a tournament there in 2014, but that didn’t diminish the excitement for him. “It’s just a really fun experience,” he said. Bailey plays center field and pitches for the Lions team.

Village of Lansing Night was arranged by Sam Lawson, Manager of Group Sales Development for the Chicago White Sox, who approached Ken Reynolds, Director of Communications for the Village of Lansing, about organizing a special promotion for Village of Lansing residents. The two settled on a night when the White Sox would be playing the Toronto Blue Jays so that the group would be able to see Granderson play. “We are looking forward to a fun event and hope all the residents who purchased tickets have a very enjoyable evening,” said Reynolds before the game.

Granderson is a 1999 TF South graduate who went on to play in the major leagues, first for the Detroit Tigers and then for the New York Yankees, New York Mets, and Los Angeles Dodgers before being signed this year by the Toronto Blue Jays. During his career he has made history by being the third major league player to join the 20-20-20-20 Club (hitting 20 doubles, triples, and home runs, and stealing 20 bases in a season). He has been a three-time All-Star and the recipient of the Silver Slugger and the Roberto Clemente Award. Granderson attended University of Chicago and has made significant financial contributions to both his former high school and college. His parents, both retired educators, still reside in Lynwood.

In Saturday’s game, Granderson was the lead-off batter, singling in his first at bat and scoring the first run of the game. It wasn’t until the fourth inning that the Sox got on the board on a 379-foot home run by third baseman Yolmer Sanchez. The White Sox rallied in the 8th inning, scoring six and leading the Sox to a 9-5 victory over the Blue Jays, giving the Lansing audience an exciting evening that ended with an elaborate fireworks show set to music. Saturday was also Super Hero Night at Guaranteed Rate Field—Spiderman and Iron Man characters interacted with the crowd, and bobblehead figures were received by early visitors. Attendance for the game was 29,442, one of the highest numbers this season.