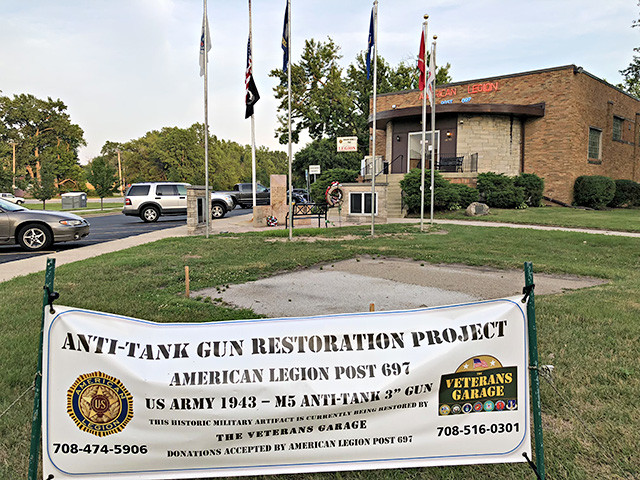 Removing, replacements, refurbishing, and reinstallation being done by the Veterans Garage

LANSING, Ill. (July 2018) – For more than 70 years, a large piece of artillery was situated outside the front entrance of Lansing’s American Legion, Edward Schultz Post #697. It looked something like a cannon, but it was actually a U.S. Army 1943 M5 Anti-Tank 3″ Gun, on loan from the United States Army Donor Program.

Last year the American Legion recognized that the gun needed some attention. Though they had occasionally sanded and repainted the gun, and annually submitted reports to the US Army Donor Program about its condition, 70 years of time and weather gradually exceeded the maintenance the Legion was able to provide. Former Post Commander Ron Line agreed to serve as point man for the restoration project.

In a letter explaining the need, the American Legion wrote, “…It’s time to take more comprehensive steps to ensure [the gun’s] longevity. …The appropriate steps include removal from the site, complete media blasting, replacement of several corroded steel components, two coats of industrial epoxy primer and finish coat of period-correct color (Olive Drab – Early WWII), and re-installation at the display site in front of the American Legion Post.” The gun had at one time been painted battleship gray, and at another time camouflage, but the Veterans Garage, who is doing the restoration, researched the gun and learned that the original color was olive drab.

As the Veterans Garage website explains, “We are Veterans and Patriots proudly dedicated to the restoration, preservation, maintenance and display of Historic Military Vehicles and Equipment.” They include a photo of Lansing’s gun on their Restoration Projects page, describing it as “in good condition, but needs to be media blasted, some rusted steel repairs made and paint professionally applied.”

The Veterans Garage is a 501(c)3 organization, staffed by volunteers. Some of the restoration—such as blasting, fabrication, and painting—had to be turned over to qualified contractors, who did the work at significantly reduced cost. The projected total to complete the restoration is $10,000, rather than the $20–25,000 that such a project would typically run.

Much of the refurbishing has been completed, but Line wants to improve the display area before the gun is returned. The existing pavers will be pulled up, and a fresh concrete slab will be poured and surrounded by iron fencing. Line would also like to include a story board with educational information about the gun and tributes to donors who help cover the cost of refurbishing it. If that work can be completed this summer, Line hopes to have a dedication ceremony when the gun is returned and unveiled, possibly around Veterans Day.

The American Legion understands that the 1943 M5 Anti-Tank 3″ Gun is meaningful to local veterans and others throughout the Lansing community, so they have initiated a contribution campaign that will allow people to make donations offsetting the expense of restoration. They have set up the following contribution levels:


There are also three remaining Plaque Sponsorships available at $200 each.

Checks can be made payable to Lansing American Legion Post #697 and mailed to 18255 Grant Street in Lansing, Illinois.