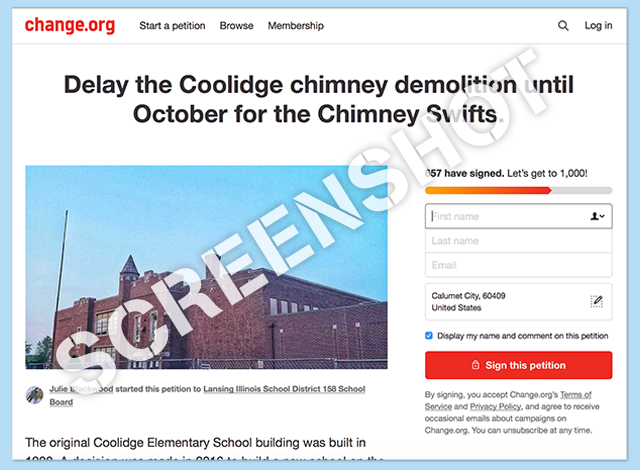 Reasons include conservation, history, and benefits to Lansing

LANSING, Ill. (July 12, 2018) – “Delay the Coolidge chimney demolition until October for the Chimney Swifts,” is the title emblazoned at the top of the online petition. It was posted three days ago by Lansing resident and recent activist Julie Blackwood. Blackwood lives near Coolidge Elementary School and has spent most nights this summer walking to Henry and Adams to join other “Swifties” in watching the growing colony return to their roost each evening at dusk.

Throughout Lansing, people are learning about the chimney swifts for the first time—though the migratory birds have been arriving in Lansing each summer for 20, 30, 40 years or more. “They do this every night?” is a common question from first-time Swifties. And whoever is standing nearby will begin sharing whatever knowledge they’ve recently gained.

Because of that initial lack of awareness, the Coolidge chimney swift petition goes into some detail explaining the situation. The case might be summarized as follows:

“We would like for decision-makers at Lansing School District 158 to see the Coolidge chimney swifts as a unique opportunity to be leveraged rather than a problem to be eliminated. With some reimagining of the plans and some readjusting of the construction schedule, the old chimney (and possibly the surrounding structure) could become a permanent nesting site for the birds and an education resource for the surrounding community. Repurposing some of the existing structure would result in fewer parking spots in the proposed parking lot, but imagine having a small learning center with information about swifts, ecology, migration, Peru, and even some history of the old school and the old chimney.

“…Community interest in the birds is already growing steadily, and with a little marketing, and some tie-ins to Fox Pointe, the Coolidge chimney swifts could attract birders, environmentalists, and curious families from throughout the area.”

The online petition also gives signers an opportunity to include “Reasons for signing.” At the time of this writing, about three dozen petitioners had chosen to post a reason. For some, the petition is about the birds; others are nostalgic about the old Coolidge building; a few see potential benefits the swifts might bring to the broader Lansing community:

The next meeting of the District 158 School Board is scheduled for Wednesday, July 18, at 7:00pm. The agenda for that meeting has not yet been posted, but the Coolidge chimney swifts are anticipated to be an item of business. Demolition of the old building cannot proceed without further direction from the USDA.

Blackwood is hoping to reach at least 1,000 signatures on the swift petition before the date of that meeting.

School Board meetings are open to the public. They take place in the Board Room at the District Office, which is located at 18300 Greenbay Avenue in Lansing.

To view the petition in preparation for the meeting, visit this link:

Several hours after this story was originally posted, the number of signatures reached over 900.