MANHATTAN, Kan. (July 3, 2018) – “I heard about the tremendous colony of Chimney Swifts at Coolidge School. That is really cool! Lansing is lucky to have them doing pest control this summer. Swifts are becoming rare in some parts of the country. They are amazing birds.”

So read the June 27 email from Professor Ted Cable, who grew up in Lansing and graduated from TF South High School in 1971. Cable became passionate about birding and attended the University of Illinois-Chicago to earn a degree in Biology. Today he is Professor of Park Management and Conservation at Kansas State University.

With his email he attached a PDF of an article he had written about chimney swifts in 2003. The article— “The Bird in Your Chimney” —says, in part, “Their common name, possibly the most descriptive of all bird names, says it all—swift. They’ve been clocked at more than 100 miles per hour. Their flight is purposeful, direct and fast.”

Cable’s article originally appeared in Birder’s World magazine, which is now defunct. Because of the growing interest in Lansing’s chimney swifts, Cable agreed to make the article available for download here: 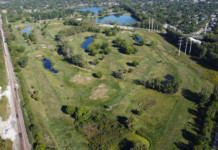