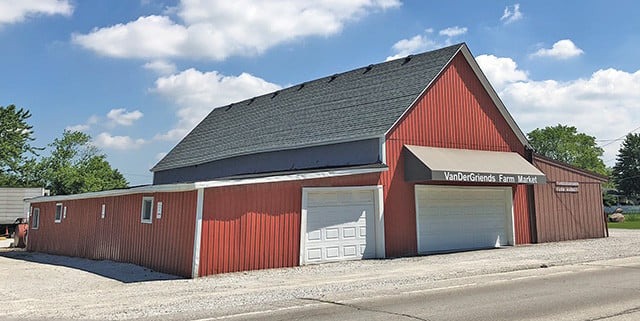 LANSING, Ill. (June 27, 2018) – The next time you stop by VanDerGriends’s Farm Stand for some sweet corn or veggies, keep this in mind: it’s there because of an entrepreneurial six-year-old.

About 61 years ago, the site was a large farm where tomatoes were grown and supplied to Libby’s canning factory. What is now the Oakwood Estates subdivision was once hundreds of acres of farmland where tomatoes were produced by the VanDerGriend family. The farmer’s six-year-old daughter, Bonnie, one day decided to set up a table at the roadside and sell tomatoes herself. Soon people were returning on a regular basis for tomatoes and suggesting that they sell other vegetables as well.

Bonnie’s little table got so busy that her mom would have to go out and help. The next year Bonnie’s father planted sweet corn. The little roadside stand continued to grow, and the family quit supplying tomatoes to Libby’s and started focusing on growing to sell for themselves.

“My grandma saw an opportunity and started the farm stand,” said Scott VanDerGriend, who now owns the farm stand with his parents, Bob (Bonnie’s little brother) and Jean. That little table of tomatoes moved into the recognizable big red barn where locals still stop for their summer sweet corn, tomatoes, and more.

There’s now a fourth generation working in the family business—Scott VanDerGriend’s two oldest children, ages 16 and 14. At least one has expressed interest in taking over the business one day, so future generations in Lansing will likely also be able to enjoy the pleasure of getting fresh locally-grown sweet corn for years to come.

The farmhouse and former horse barn have been there for about 160 years, according to VanDerGriend. Aside from adding a cement floor and awning, the rest of the barn is still original. It’s been in VanDerGriend’s family since 1939 when his grandfather purchased the property.

As a seasonal business, they open in May to sell flowers and then close up for the month of June to get ready for vegetable sales. Depending on the weather and how crops are affected, opening day varies. Some years the red barn open in early July, and other years it opens mid-month. VanDerGriend said that the recent hot spell helped the corn progress, so he anticipates opening around July 8. The business has a Facebook page that can be followed for updates.

“We used to be open in June, but we are pretty known for our sweet corn. People would come in looking for it and say they’d just come back when the corn was ready,” said VanDerGriend.

The farm remains open through the summer and early fall, transitioning to pumpkins, corn stalks, and fall decorations. The last day of business each season is October 31.

After his father sold the farm land for development of Oakwood Estates, the family purchased farm land in Beecher, and that’s where the majority of the produce sold at the stand is grown. No fruit is grown on the farm. Items like bananas are purchased by Scott at the central market in Chicago, and his father makes frequent trips to Michigan for blueberries and peaches.

Besides growing vegetables for their farm stand, the VanDerGriends also supply several area restaurants with produce and also sell their items at the Calumet City Farmer’s Market held on Fridays from mid-July through October. In addition to co-owning the farm stand with his parents, VanDerGriend is also co-owner of Windmill Brewing in Dyer, which opened in August of 2015.