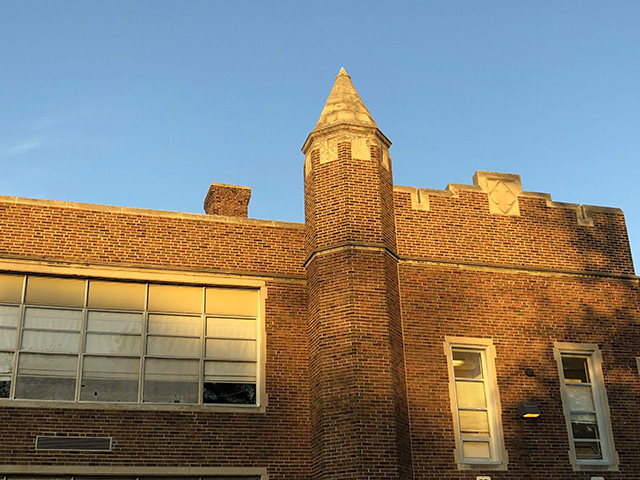 “Definitely a learning opportunity—for all of Lansing,” says Superintendent Heiberger

LANSING, Ill. (June 20, 2018) – Dr. Ceal Heiberger was surprised to learn about the large colony of chimney swifts that has been nesting at Coolidge Elementary School for 20 years or more. It was only after construction plans were well underway that the birds’ migratory patterns became an issue.

Avian Wildlife Rehabilitator Kat Podgorski is the Lansing resident who alerted Heiberger to the situation. Podgorski has lived across the street from Coolidge for 15 years, and the swifts’ summer return to the large chimney is something she notices and enjoys each year.

When the demolition fences went up last week, Podgorski began to get concerned. The size of the old brick chimney allows it to accommodate more than 200 swifts. By comparison, an uncapped residential chimney might become home to a single pair of swifts. Including the Coolidge chimney in the demolition of the old school building would leave more than 200 birds without a home.

And depending on the timing of the demolition, it could destroy any eggs and fledglings inside.

Chimney swifts are a migratory species of bird native to Peru. Swifts migrate north for the summer, lay eggs, and raise their young, giving them time to become strong enough to migrate back to Peru around October. A typical clutch is 4–5 eggs, and the eggs hatch after 19–20 days. During summers in Lansing, the adult swifts leave the chimney each morning to feed and gather. At dusk they return home, swarming the chimney and chirping their arrival to the young inside.

Because of the design of their feet, swifts do not perch on horizontal surfaces as most other bird species do. Instead, they grip vertical surfaces when necessary, though most of their daily life happens on the wing. The birds originally nested in hollow trees along their migratory path, but now chimneys and other man-made structures are more available. There are other colonies of swifts in Lansing—commonly in churches—but the Coolidge colony is the largest.

Chimney swifts are not yet considered endangered, but their population is in decline because of generations of urban development and widespread use of insecticides. Chimney swifts throughout the U.S. are protected by the Migratory Bird Treaty Act of 1918, which makes it illegal “to pursue, hunt, take, capture, kill, or sell birds listed therein as migratory birds. The statute…also grants full protection to any bird parts including feathers, eggs, and nests.” (Source: Wikipedia)

In a June 18 phone call, Dr. Heiberger said she considers the Coolidge chimney swifts “a hidden gem,” and she included them on the agenda for the June 20 meeting of the District 158 School Board. There Heiberger expressed to the Board her desire to be “accountable to all the different parties within the community.” She had outlined these accountabilities in a June 18 letter to District 158 families and community members:

“The District is accountable to our taxpayers regarding construction costs, accountable to parents to ensure that our school is ready for our students on time, and accountable with respect to the federal laws in place to protect the Chimney Swift birds.”

Heiberger reported that she has been in contact with a wildlife specialist from the USDA Wildlife Services who recommended first confirming that the birds are chimney swifts (they are), and then determining whether any nests have been built in the chimney. The Lansing Fire Department assisted by providing their high-bucket ladder and allowing a licensed wildlife specialist to get inside the chimney and take photos. Photos were taken from the top of the chimney as well as from openings near the bottom that are used as clean-outs. That specialist confirmed there is a nest with two eggs located about eight feet below the top of the chimney.

The photos were forwarded to the USDA, and Heiberger also passed around printouts for the Board members to view. “We’re just awaiting their instruction,” Heiberger summarized the situation for the Board. “We’ll take it a day at a time.”

After the meeting adjourned, School Board President Robert Bonifazi said, “This came as a surprise to us. We had no knowledge of this. The logistics is a challenge because we created this deadline to get all students into the new part of the school so we can repurpose the old section of it—so the timing isn’t favorable. But we’re gonna do what we need to do to make sure that we respect the ‘Swifters.’”

The “Swifters” Bonifazi referred to are actually more commonly known as Swifties. They are Lansing residents and out-of-town friends who congregate at Coolidge at dusk to watch the Coolidge chimney swifts return home. Some bring lawn chairs. Some bring cameras or binoculars. Many did not know each other before the chimney swift phenomenon, but a sense of community forms as they gather and chat and share what they’ve learned about the birds. A few of the Swifties have shown up every night for the past week, though most attend more randomly.

Local photographer Dan Bovino described the June 19 meeting of the Swifties: “Last night’s crowd of Swifties watched the birds return as a gentle summer rain intermittently sprinkled around us. It was a pleasure to connect with like-minded folks that care so much about the welfare of these beautiful birds.”

Other swift visitors have included Julie Blackwood, Logan Stockdreher, Alex Stockdreher, Bob and Judy Alderden, Patty Oliver, Patty Grigutis, Stephen Serba, Dave and Laura Price, Jim and Joanne Kijewski, Pam Van Austin, and Moira Peterson as well as others. They have come from Lansing, Lynwood, Munster, Dyer, and even New York. A former Lansing resident who now lives in Fayetteville, Arkansas, is planning to include a stop at Coolidge when he returns to the area for a visit next week.

A hope for co-habitation

While relocating the adult birds is one option under discussion, Kat Podgorski is daring to hope that somehow the old Coolidge chimney can be incorporated into the new plans for the Coolidge campus. “Losing the chimney would mean they lose their home,” she said via email. “It would also bring a silent spring without their chatter filling the skies. This is something I hope with all my heart we don’t see happen.

“I look forward to finding a solution that does right by the birds and still affords Coolidge the space it needs. The last thing we need is to demolish the chimney and put up a proverbial parking lot. There’s too much of that happening as it is in this world, and the swift populations are suffering as a result.”

Heiberger too expressed a desire to find the right solution. “How do we continue to be a place for them to call home,” she wondered aloud, while also considering the construction schedule the Coolidge constituency is on. When large, detailed plans have been invested in and set in motion, it is no small task for a focused administrator to stop and consider new vision. Any change of plans would have a domino effect on timelines, budgets, and results.