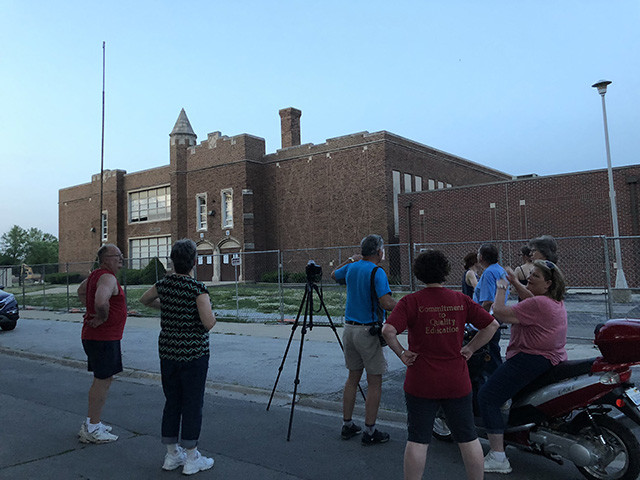 LANSING, Ill. (June 15, 2018) – Julie Blackwood and her sons, Logan and Alex, were the first to show up at the corner of Henry and Adams the evening of June 15. Unsure of what to expect, they had walked over from their home on the next block and were lingering and wondering. Only a few minutes later, Patty Grigutis motored up on her “Harleyette” and joined the conversation. Little by little, the group grew to a dozen people—Stephen and Laura Serba, Dan and Sue Bovino (and their dogs), Dave and Laura Price.

They had come to see the Coolidge chimney swifts.

Conversation flowed easily as people joked around, asked questions, and introduced themselves. It wasn’t long before the group began referring to themselves as “the Swifties,” and began casting a vision of lawn chairs and beverages to more fully enjoy the nightly event.

As early as 8:35pm, a few solitary swifts were sighted, circling the large Coolidge chimney, not quite ready to swoop in yet. And as dusk approached, the swifts began arriving in larger groups, chirping and circling, and then suddenly dropping into the chimney.

By 9:00pm, most of the swifts were safely ensconced in the Coolidge chimney, but the Swifties were still congregating. Kat Podgorski had arrived by this time, and she answered questions about the development of the fledglings, about the migratory path, and about the birds’ protected status. Podgorski happens to be a former Field Biologist and Avian Wildlife Rehabilitator, so she knows a lot about birds. Plus, she lives right across the street from Coolidge Elementary School and has been watching the construction.

The Coolidge colony of swifts will grow throughout the summer as fledglings take flight and gain strength. On this evening, Swiftie Stephen Serba estimated they had watched more than 100 swifts swoop into the chimney. His wife Laura wants to find a “clicker,” so she can keep a more accurate count of the colony and track its growth.

With a closing discussion about what might be involved in designing a logo for Swiftie t-shirts, the first meeting of the Lansing Swifties adjourned. The next meeting of the Swifties has not been officially scheduled, but the swifts convene each evening at dusk. Visitors are welcome.

To receive daily updates about Lansing news—including Swiftie stories—subscribe to the daily digital edition of The Lansing Journal. You’ll receive an email each morning with Lansing headlines: