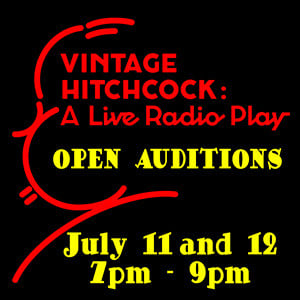 SOUTH HOLLAND, Ill. (June 9, 2018) – The PAC Rats Theatre Company of South Suburban College will hold open auditions for Vintage Hitchcock: A Live Radio Play on July 11 and 12, beginning at 7:00pm. Readings will be held in the Kindig Performing Arts Center on the main campus at 15800 S. State Street in South Holland.

Playwright Joe Landry has adapted three of Alfred Hitchcock’s earlier films into suspenseful dramas in the style of a 1940s radio broadcast. The Lodger, Sabotage, and The 39 Steps form a triple feature that recreates a daring train chase, a serial killer’s ominous presence, and a devastating explosion complete with live sound effects performed on stage.

“We’re looking for good speaking voices for the many characters in the three stories,” says Director Sandra Wagner of Lansing. “Some characters have one or two lines each, some are main characters. Actors could play more than one role, so the ability to do multiple voices or dialects is a plus, but not a must.”

In addition to acting talent, the PAC Rats are also seeking volunteers to create the many live sound effects or to build and paint scenery.

Auditions are open to all community members as well as South Suburban College students age 18 or older. Appointments and prepared audition materials are not necessary. Auditioners will read from scenes, which will be available at the time of auditions. Copies of the script are on reserve in the SSC library. Everyone is welcome to attend both auditions. Be prepared to list all conflicts with the rehearsal schedule.