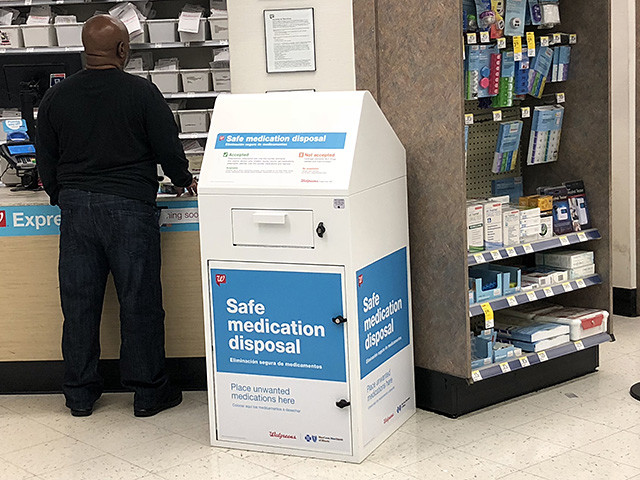 Lansing location is now one of 1,000 kiosks nationwide

DEERFIELD, Ill. (June 11, 2018) – Walgreens today announced it has reached 1,000 safe medication disposal kiosk installations at its drugstores nationwide. Joining company officials to mark the milestone at one of its Las Vegas stores was Governor Brian Sandoval of Nevada, where Walgreens has expanded its safe medication disposal kiosks this year to 12 drugstores throughout Nevada.

Walgreens kiosks allow individuals to safely and conveniently dispose of unwanted, unused, or expired prescriptions, controlled substances, and over-the-counter medications year-round at no cost. The kiosks are available during regular pharmacy hours. At the Lansing Walgreens located on Wentworth and Ridge, the pharmacy is open 8:00am–midnight, seven days a week.

Walgreens’ president of operations, Richard Ashworth, said Walgreens is proud to provide a solution for getting unwanted medications out of homes and away from landfills. The kiosk program began in 2016 and has already collected and safely disposed of more than 270 tons of medications. The program makes the disposal of medications—including opioids and other controlled substances—easier and more convenient while helping to reduce the misuse of medications and the rise in overdose deaths.