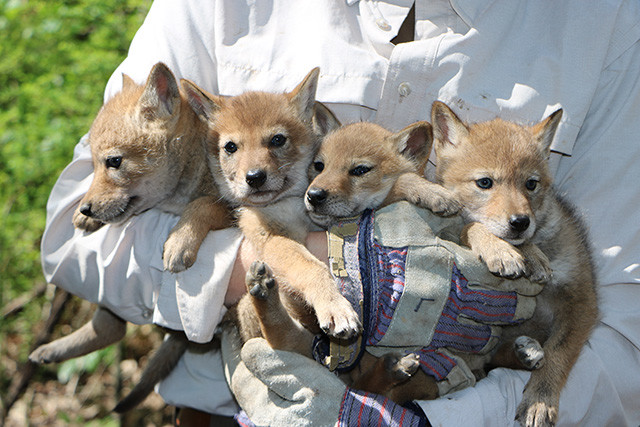 COOK COUNTY, Ill. (June 2, 2018) – In addition to migrating birds and colorful wildflowers, springtime also means it is coyote puppy season in the Forest Preserves of Cook County. Each spring, wildlife biologists follow up on mother coyotes to locate dens and conduct health work-ups on the puppies as part of the Urban Coyote Research Project, a partnership between the Forest Preserves of Cook County, Cook County Animal & Rabies Control, Max McGraw Wildlife Foundation and The Ohio State University.

“We’ve been following the females that are tagged, and they get very reliable to one location because that’s where their den is going to be. We make certain that we don’t disturb them, and when it seems to make sense based on their limited movements, it gives us the indication that they do in fact have pups at the location,” explains Chris Anchor, senior wildlife biologist for the Forest Preserves of Cook County.

Biologists go in as a group to try and find the pups, and then do a health work-up and tag the puppies. The work has been ongoing for nearly 20 years, and DNA profiles have been collected for more than 1,200 coyotes.

“Doing the health work-ups and collecting DNA gives us a sense of the social interactions of the animals, and the reproductive rates the coyotes are having, which is an indication of the quality of the habitat,” says Anchor.

The Urban Coyote Research Project was initiated in 2000 as a non-biased attempt to address shortcomings in urban coyote ecology information and management; the Coyote Project is still underway. With the help of many key agencies, a continuous subset of coyotes is live-captured, collared, and released at their capture site. Coyotes are monitored to understand how they live in urban areas and how they interact with other wildlife, domestic animals, and humans. 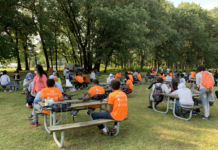