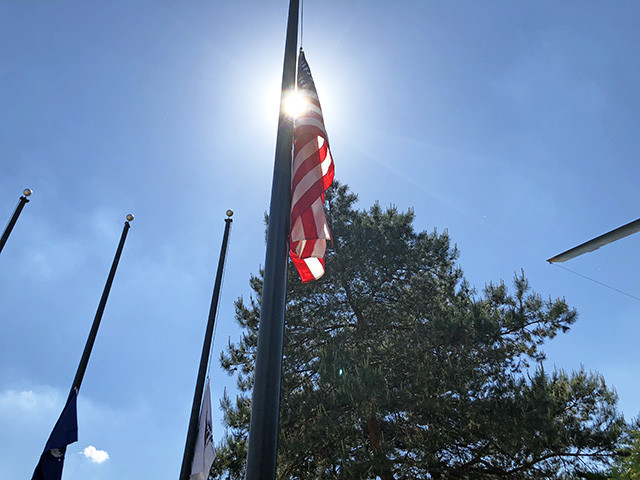 photos and story by Melanie Jongsma

LANSING, Ill. (May 27, 2018) – “Would you like a bottle of water?” Mayor Patty Eidam asked, wheeling a small cooler around to individuals and families who had gathered at the Lansing Veterans Memorial. On this Sunday afternoon of the annual Memorial Day Service, the 94-degree temperature was intensified on the pavement of the parking lot, so the Mayor’s gesture was gratefully accepted. The crowds sought out shade wherever they could find it—against the Ford Hangar, around the few trees, or under their lawn chair canopies. But everywhere was hot.

Rich Dominiak, organizer of the event and Coordinator of the Memorial Honor Guard, drew comparisons to the deserts of Afghanistan and Iraq, reminding the crowd of the everyday kinds of sacrifices our service people make.

Today’s Memorial Day Service was the 26th that the Ceremonial Honor Guard has observed, starting soon after the Lansing Veterans Memorial was built. The ceremony included participation from a variety of veterans organizations and community group, including:

In addition, Tess Hensley, Abigail Kleidon, and Morgan Kleidon—three young girls from Lansing Girls Softball—opened the service by singing the National Anthem following the raising of the American flag. And violinist Alexis Ochoa appeared near the end with a rendition of “Amazing Grace.”

A highlight of the annual service is the Placing of Wreaths to honor Lansing’s fallen. Accompanied by stirring music, and hailed with raised flags, family members and civic organizations are called forth to place a wreath or flowers at the section of the memorial wall designating the appropriate war:

The end of the service included an acknowledgement of the five wars in living memory—World War I, World War II, the Korean War, the war in Vietnam, and the Gulf War—along with the number of casualties in each. “Hopefully by next year, we will not have to add any more,” said Dominiak. “Let’s bring our troops home.”