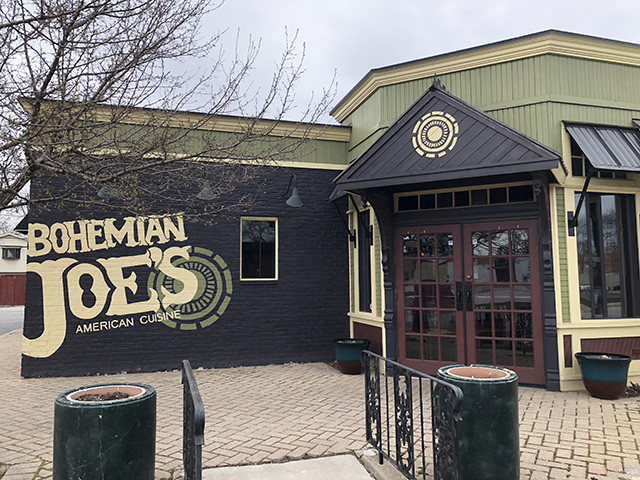 “It was a special place,” say owners Chris and Tawnee Paliga

LANSING, Ill. (April 28, 2018) – “The timing was right,” said Chris Paliga about the sale of Bohemian Joe’s, the Lansing restaurant he and his family opened in January of 2016. He had not been planning to sell, but when he was approached with a “very fair offer,” he began to consider the possibility.

“It was a difficult decision,” agrees Tawnee Paliga, Chris’s wife. “There were so many things we enjoyed about Bohemian Joe’s—lots of customers became repeat customers and actually became friends, so it’s difficult to say goodbye to them. And we had lots of wonderful staff members.” But both Paligas acknowledge the stress and strain of the restaurant business in general, and of Bohemian Joe’s in particular because so much of their family was involved. “When you go home, or whenever you’re with family, and we’re all still talking about business, there’s just no time when you’re away from work,” said Chris.

Although the family’s original plans were to run Bohemian Joe’s for at least a few more years, Chris said, “I like the circumstances we’re leaving in.” The Paligas made a lot of improvements to the building before opening two and a half years ago, and they enjoyed being involved in the Lansing community. “Lansing’s been wonderful to us,” said Tawnee. “It’s a great community.”

In fact, that sense of community may be the greatest legacy of Bohemian Joe’s. From the very beginning, as the family worked together to come up with the restaurant name and brand, “Bohemian” kept bubbling to the surface. Not only does it reference the Bohemian Joe’s Hotel & Tavern in Lansing along Bernice Road in the 1900s—which is where Chris’s great grandparents met!—but the term also has connotations of an eclectic, optimistic mix of cultures, fashions, and tastes. That’s the atmosphere the family was working for.

Chris and Tawnee believe they achieved it. Both said, “I feel like we had a place where anyone could come and feel comfortable, where everyone was welcome—all ages, all nationalities. It was a special place.”

“This experience was fun,” Chris added. “And I hope everyone has good memories of being here.”

In the weeks leading up to the restaurant’s April 28 closing, Chris considered printing up a t-shirt with the answers to the questions he was most frequently asked, including these:

“What will you do next?”

While Chris appreciates people’s concern and interest, he admits he doesn’t have a good answer to this question. “I’m just takin’ a break for a while,” he said. Chris brought a variety of business background and a broad sense of community to the Bohemian Joe’s venture, which was a refreshing of the Popolano’s restaurant his parents and brother and sister-in-law owned at the same location. The new family enterprise included wife Tawnee and daughter Dani’s hospitality experience, son Topher’s marketing and technology experience, son Dustin’s vast knowledge of craft beers, and son-in-law Brandon’s unique-but-familiar menu creations. The whole family invested a huge amount of time and energy, and Chris is ready for a healthy break. Tawnee is looking forward to seeing Chris take care of himself for awhile instead of looking after everyone else’s needs.

“What will happen to my Bohemian Joe’s gift card?”

“I don’t want to screw anyone,” said Chris about the gift cards, so one of the first details he took care of was making sure Bohemian Joe’s gift cards would be honored even after the restaurant closed. He reached out not only to the new owner, but also to Lynn Cartwright of Lynnie Que’s, Amy Todd of Mancino’s, and Joellyn Favia of JJ Kelley’s. All agreed to accept Bohemian Joe’s gift cards at their establishments. The Paligas have often spoken of the camaraderie that characterizes the Lansing business community. It’s one of the things they will miss most about running Bohemian Joe’s.

“Are you taking your recipes with you?”

There are a few items on the Bohemian Joe’s menu that were originals created by family and staff, and Chris and Tawnee are proud of the way so many people got involved and left their mark. At the same time, Chris mentioned, there is a lot of crossover among restaurant dishes. For one thing, many restaurants use the same suppliers for their ingredients. For another, it’s not uncommon for chefs and cooks to move from one kitchen to another. So Chris predicts that Lansing residents will find something to love about the new menu once the restaurant changes hands.