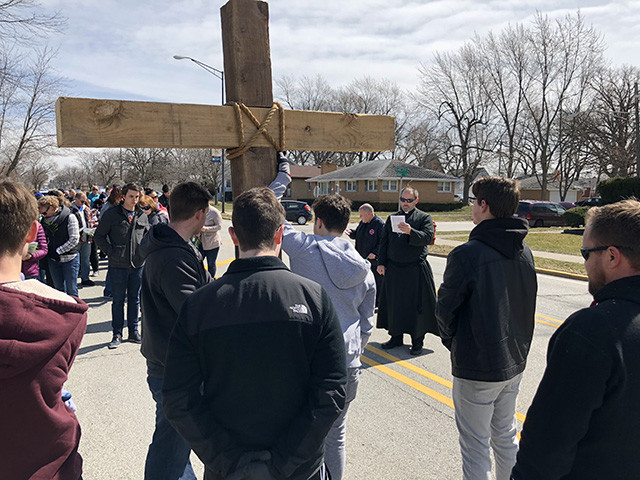 LANSING, Ill. (March 30, 2018) – By noon on Good Friday, the clouds had cleared, and bright skies blessed the nearly 200 people gathered in the parking lot of St. Ann’s Catholic Church. The second annual Good Friday prayer walk drew parishioners from a variety of faith backgrounds as well as a few whose spiritual path is less defined.

After an opening prayer, the pilgrimage headed south on Chicago Avenue, then west on Ridge Road, and finally north on Glen Terrace, pausing on the lawn of Trinity Lutheran Church before going inside for a “Bidding Prayer” service. Along the way, the congregants and the curious stopped 14 times for Scripture readings marking significant events in Jesus’ path to the cross.

Observing the Stations of the Cross is more familiar to the Catholic tradition, though in recent years Protestant congregations have taken up the practice. By physically involving themselves in a remembrance of the events of Good Friday, church members find new meaning in the familiar texts.

It was Rev. John Holyer of Trinity Lutheran Church who introduced the idea to Lansing last year and made it an outdoor, community event. Having developed a friendship through their membership in the Lansing Ministerial Association, Holyer and St. Ann’s Father Bill McFarlane worked together on the details. Pastor Michael Eberly of First Baptist Church, who had never done the Stations of the Cross, also participated. “I didn’t know what to expect,” he remembers about last year’s walk. “I was really encouraged by the amount of participation last year—from passersby who seemed to be interested in what was going on, and from the Lansing Police Department, who were very helpful in making the event possible.” This year Sgt. Gabe Barajas organized the police escort, leading the procession with flashing lights while two other patrol vehicles shepherded the flock from the rear.

There are variations on the traditional Stations of the Cross, and at different points in history, 7, 12, 14, and occasionally 15 stations have been observed. The forms used often include a mix of Biblical and extra-Biblical accounts. For Lansing’s Good Friday walk, Holyer and McFarlane used the Scriptural Way of the Cross, which observes 14 stations that have a Biblical foundation. Participants were given a small booklet as a guide for their journey, with the Scripture texts, prayers, and responses printed.

Though many Stations of the Cross observances use images to depict the events of Christ’s passion, Lansing’s community observance relied solely on the reading of the Word to convey the Way of the Cross. At each station along Ridge Road, one of the participating ministers read the Scripture text and prayer, and the crowd prayed in response: “Lord Jesus, help us walk in your steps.”


Joining Holyer, McFarlane, and Eberly this year were Rev. David Price from First United Methodist Church and Pastor Leroy Childress from Grace Church. All Lansing churches were invited to participate, but Holy Week responsibilities can make new traditions difficult to add to a minister’s schedule.

Participation was not limited to church adherents however. Keimon Crayton had come to Lansing to visit his mother. She wasn’t home, so he stepped outside and happened to see the crowd, the cross, and the police escort—and he decided to join the throng. “I truly think that I was meant to be here,” he said.


Whether or not participants identify with a particular religious tradition, Pastor Eberly believes it can have meaning. “We’re all asking who Jesus is,” he said. “Different faiths answer that question differently. I would say that even non-Christians would get something out of this.”

“My goal in doing it,” said Rev. Holyer, “is, one, for people who are Christian to have a very solemn observance of what for us is the most important event in history. It’s a very moving experience and spiritually enriching. For those who are already believers, this can deepen or strengthen their faith.”

The Tellez family agrees. Members of St. Ann, they followed the procession all the way to Trinity Lutheran, where they took a moment to pray at the cross before quietly leaving.

They participated because the observance affirms their Christian belief and their Catholic traditions. But they left with an extra blessing: “It’s nice to see the community—and the religious community—come together,” said Yoly Tellez.

Her husband John added, “Yes, we need that in this time.”