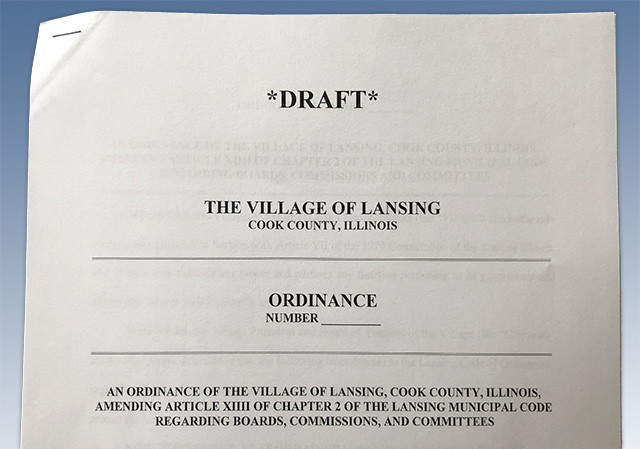 LANSING, Ill. (March 23, 2018) – During the Committee of the Whole meeting on Tuesday, March 20, Mayor Eidam included in her Mayor’s Report an update on the formation of a Human Relations Commission in Lansing. She had begun discussions on the topic about two years ago, before her election in April of 2017, and at that time the goal seemed fairly straightforward: “We wanted to create a Commission to help promote our community involvement for all Lansing residents,” she reported to the Board. The draft ordinance included in the Board’s packet was the result of a long process of information-gathering, and Mayor Eidam stressed that it is only a draft and that the work is ongoing.

Lansing has a variety of Boards and Commissions, and each one is guided by a Village ordinance that defines the purpose, size, and responsibilities of the group. It has been 21 years since Lansing formed any kind of new Commission, and the Human Relations Commission will have a unique, uncharted role in Lansing’s development, so the process is necessarily complex.

Mayor Eidam invited Director of Communications Ken Reynolds to share with the Board more about the steps involved in forming the Human Relations Commission. Recognizing the significance of the proceedings, Reynolds read from a carefully prepared statement:

Since Mayor Eidam took office in May of last year, both the administration and she have recognized the need for Lansing to embrace its diversity within our residential and business populations. What you have in front of you tonight is the first draft of what has the potential to be a powerful tool in helping the Village move toward this identified goal. The formation of a Human Relations Commission is one major step in helping to ensure that all Lansing residents feel valued and appreciated within their own identified cultures and as part of the Village as a whole.

Reynolds continued by describing some of the events that influenced the formation of the HRC, including last August’s community forum, meetings with residents and clergy, and two workshops comprising diverse members of the Lansing community. “These workshops were held at the request of several Lansing residents and clergy members who felt minority input was essential to the formation of any potential ordinance dealing with human relations,” said Reynolds. He later shared that the emotion at the workshops was high, and opinions were freely expressed—and he affirmed that this kind of engagement is necessary to the creation of a Commission that will be doing meaningful, potentially controversial, but community-building work.

The draft ordinance recommends that the Human Relations Commission consist of nine members. As of March 29, the Village has received 13 applications, and Reynolds would prefer at least 20 in order to ensure a diversity not only of race, but also of experience, age, economics, and connections. He wants applicants to recognize the difficulty of the work this Commission will be engaged in. More than simply planning the standard Hispanic Heritage Month, Black History Month, and Women’s History Month observances, the hope is that Lansing’s Human Relations Commission will impact daily life and business in Lansing, including the new opportunities that the Fox Pointe venue will make available.

Some are adopting a “wait and see” attitude toward the Commission, expressing doubt about whether the group will have any real authority. Reynolds acknowledges the skeptics and admits that a lot remains unknown. The Human Relations Commission will have no more or less authority than any other Commission in Lansing. The influence it is able to wield will depend in large part on what the appointed individuals bring to the conversation and what kind of synergy they achieve as a group. He does hope people will recognize that the entire process is a sincere and ongoing effort. “If the community doesn’t see it as genuine, then it has no chance of success,” Reynolds said.

“This is something that could be very historic within the history of our Village,” he explained at the meeting. “We are reaching out and making sure that we have a document in place that does the best job possible in making all of our residents feel part of our Village.”

A downloadable, printable PDF of the application can be directly accessed here:

For people who prefer completing the application online, that option is also available:

Reynolds is even considering other ways to gather information from interested community members who may be more comfortable with a verbal presentation than a written application.

There is no firm deadline for submissions, but Reynolds would like to continue forward progress on creating the Commission, so interested community members are encouraged to apply as soon as possible.

Mayor Eidam will then oversee interviews of all the applicants in order to select a slate of Commissioners that will be recommended to the Village Board for their approval.

Trustees are now reviewing the draft ordinance and are expected to discuss it at future meetings. All Lansing residents are invited to share input or ask questions about the Human Relations Commission (or any other municipal issues) by clicking to contact their representatives directly:

Village Board meetings and Committee of the Whole meetings take place at the Municipal Court Complex (the police station) at 2710 170th Street on the first and third Tuesdays of the month. The next meeting is scheduled for Tuesday, April 3, at 7:00pm.