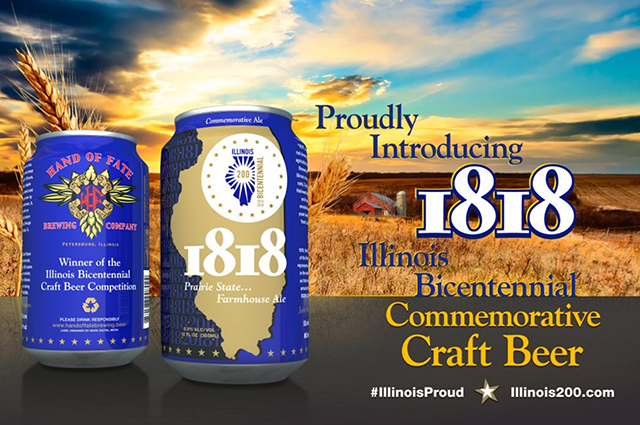 Hand of Fate Brewing Co. of Petersburg was chosen to create the special birthday brew after winning the Bicentennial craft beer contest at the Illinois State Fair in August. The beer is distributed by Breakthru Beverage Illinois.

“This is a great Illinois small business story,” said Governor Rauner. “Hand of Fate started their business less than two years ago, and this opportunity is helping catapult their well-earned success. ‘1818’ honors our agricultural legacy with quality Illinois ingredients, and I look forward to beer drinkers across the state enjoying this Bicentennial beverage.”

There are over 240 craft brewers in the state. The Illinois Craft Beer industry has seen a 350 percent increase in the number of craft breweries over the last five years.

“I am so proud of Mike and the crew at Hand of Fate,” said state Rep. Tim Butler. “I can’t think of a better way to celebrate our state’s Bicentennial than with a craft beer that is made in Illinois by a local business with local ingredients.”

Mayor Langfelder commented, “As the home of Abraham Lincoln and the capital of this great state, Springfield is excited to host many events and activities throughout the Bicentennial year. This includes the opening of the new Bicentennial Plaza along Jackson Street that connects to the refurbished Governor’s Mansion, and we are also very proud to have a great local craft beer as part of these celebrations.”

On hand for the announcement was Hand of Fate owner Mike Allison and Hamilton Callison from Breakthru Beverage.

“We are so thankful to the Governor and the Bicentennial Commission for providing the opportunity to brew 1818,” said Hand of Fate owner Mike Allison. “This is a dream come true for my family and my employees.”

The beer features staple Illinois crops including corn, wheat and oats. The crystal hops are grown by Hallowed Hops of Lewistown, and fermented with a hybrid saison yeast developed by Omega Yeast Labs of Chicago.

Retail outlets, restaurants and bars featuring craft beer will offer ‘1818’ throughout Illinois both on tap and in cans. Locations can be found here.

ABOUT HAND OF FATE

Hand of Fate Brewing Co. is a small brewery that opened on the historic Petersburg Square in May 2016. The company brews a variety of high quality beers that appeal to all spectrums of craft beer drinkers. With the statewide release of 1818, Hand of Fate looks to expand with more offerings throughout Illinois.

Cicero-based Breakthru Beverage Group is a leading North American beverage wholesaler driving innovation in the marketplace with a nimble and insightful approach to business. The company represents a portfolio of premier wine, spirit, and beer brands in the United States and Canada. Family ownership is active in the business and committed to being stewards of heritage and champions of innovation. For more information, visit www.BreakthruBev.com.

ABOUT the ILLINOIS BICENTENNIAL

On December 3, 1818, Illinois became the 21st state in the union. The Illinois Bicentennial is a yearlong celebration of what has been BORN, BUILT, & GROWN in the state and a reminder of why we are #IllinoisProud.

Citizens are encouraged to participate in the celebration by visiting www.illinois200.com and using the hashtag #IllinoisProud. Partners and event and project managers planning activities between December 3, 2017, and December 3, 2018, can apply for endorsement to become an official part of Illinois Bicentennial by visiting the PARTICIPATE page at www.illinois200.com.