When this story was originally published, it stated that Village Administrator Dan Podgorski “did hire a firm called JPH Incorporated to provide certain professional services to Lansing….” In actuality, as Village Administrator, Podgorski makes recommendations to the Village Board about hiring, and it is the Board who votes on whether the hiring will occur. The story has been updated to state that hiring relationship more accurately.

That article is posted in the Local Government category, along with other articles and meeting notices. Future installments of this series will be added as they become available.

This month we will begin focusing on the nine Village departments, because they interact directly with the public in various ways. Nine departments is a lot to take in at once, so we’ll break them into smaller groups. 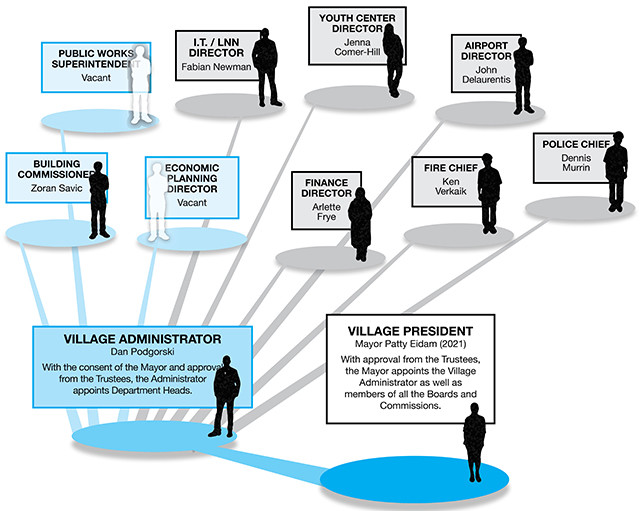 A good group to start with is the Building Department, Public Works, and Economic Development. These three departments work together on existing structures in Lansing and new developments.

The Building Department’s main purpose is to ensure the safety of Lansing residents. To that end, their responsibilities include reviewing construction drawings, issuing permits, conducting inspections (including health inspections of restaurants), managing vacant properties, and enforcing village codes that apply to property maintenance. As the head of this department, the Building Commissioner manages a team of four inspectors.

The Building Department can have a positive or negative impact on economic development in Lansing, because businesses and contractors prefer to work with a Commissioner and inspectors who are fair, efficient, responsive, and customer-friendly.

Building Commissioner Zoran Savic understands that. “I’m here to serve all of you,” he said. “I look forward to working tirelessly on a daily basis to continue to make Lansing a wonderful place to live. We already have a Building Department that is doing well. Now we just need to move forward from there.”

While the Building Department focuses on the systems within individual buildings, Public Works is mainly responsible for the systems that connect buildings throughout the Village — our streets, sidewalks, sewers, water mains, and other infrastructure. An effective Public Works Superintendent creates a culture of proactive problem-solving within the department, not only responding to calls from residents, but also addressing potential problems before they become issues. Patching potholes, removing downed tree limbs, clearing debris from stormwater grates — these are all small things that can prevent larger problems, which are more costly to correct.

Just as important, addressing the small things sends a message that Lansing is a community that people are proud to live and work in, which can enhance Economic Development. Lansing’s Public Works Superintendent position is currently vacant.

The Director of Economic Development is responsible for enhancing the economic vitality of the Village by attracting new businesses and retaining existing businesses. To accomplish that, an Economic Development Director must be familiar with Village ordinances, zoning laws, available grants, department budgets, and Lansing’s Comprehensive Plan.

Although these three departments are vital to Lansing’s health and development, two of the three leadership positions have been vacant for six months or more. Within the realm of Economic Development, Village Administrator Dan Podgorski did recommend the hiring of a firm called JPH Incorporated to provide certain professional services to Lansing for 25–30 hours per month, at approximately $80 per hour. At the October 3, 2017, meeting, the Village Board authorized the agreement with JPH.

For more detailed information about the responsibilities of the Public Works Superintendent and Economic Development Director — and the qualifications required for these leadership positions — job descriptions can be requested from Village Hall. Applications and resumés can be emailed to [email protected].

Residents who have questions, comments, or requests for the Building Department, Public Works, and Economic Development can call the direct number for each department: