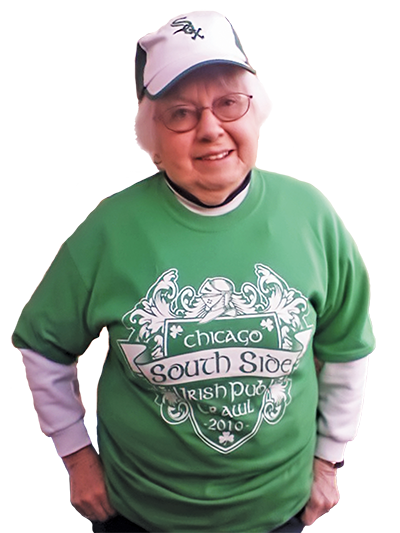 Reflections of an Irish granddaughter

LANSING, Ill. (March 2018) – Everyone is Irish on St. Patrick’s Day. A celebration famous for green beer, corned beef and cabbage, and parades, St. Patrick’s Day is celebrated by people around the world, especially in Chicago. With many long-standing traditions in the city, Chicago is home to one of the largest St. Patrick’s Day celebrations, often even surpassing the parties held in Ireland.

And these celebrations aren’t a new thing: my grandmother Jeanne Arvia (née Horan) was born in 1924 and has been celebrating ever since. She vividly remembers celebrating the day while growing up on Chicago’s south side.

“They didn’t celebrate the way they do now,” she said. “The parties were more local, more personal.”

In the 1850s, my grandma’s great-grandfather, Matthew Horan, came to the United States to escape the potato famine. After arriving, he joined the army and fought in the Civil War for the North. After the war, he was given a land grant in Illinois to start a farm, where some descendants still live today. Since then, most of the family has stayed in Illinois. Grandma has lived in Lansing for the past 10 years.

Grandma’s entire family is Irish, so traditions were celebrated by the entire household. Baking soda bread and giving shamrocks to each other were part of the Horan family fun. Of course, wearing green was a favorite custom as well.

“Ireland is divided. Northern Ireland is English, and they were the ones who wore the orange. Southern Ireland wore the green. And they were always fighting each other,” she said. “My mother used to tell me, ‘Don’t you wear any orange!’ It was just Irish rivalry.”

Grandma grew up Catholic as well. On the years that St. Patrick’s Day happened to fall on a Friday during Lent, the Catholic church granted a dispensation, allowing folks to enjoy corned beef. Just last year, in fact, St. Patrick’s Day fell on Friday during Lent. Even though grandma usually eats fish on every Friday throughout the year, not just Lent, she indulged in some corned beef last year!

And this year, the plan is similar: “I’ve got a little pot of artificial flowers that I’ll put on my table. I’ll wear my St. Patrick’s Day pin and eat corned beef and cabbage! I’ll have a little sip of beer, too.”