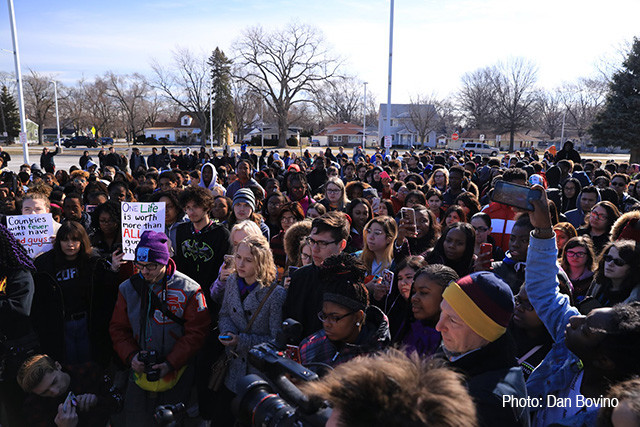 LANSING, Ill. (March 14, 2018) – Schools across the country participated in a national walkout in protest of gun violence in the United States. Students in Lansing, at Thornton Fractional South High School, were among the hundreds of participants.

Organized by Jadyn Newman, a junior at TF South, the walkout was held in front of the school from 10:00am–10:17am, one minute per life lost at the recent Parkland, Florida, shooting at Marjory Stoneman Douglas High School. With support from the school board and TF South staff, students were allowed to participate in the walkout to show their support of stricter gun laws in the US. Parents and other members of the community were also invited to attend the walkout and support the students involved.

Mason Henning, a TFS senior, began the demonstration by reading the names and ages of the 17 victims of the Parkland shooting, followed by a moment of silence. Henning then began speaking about gun violence, using his own story and personal life experiences.

While addressing a recently circulated Facebook post that encouraged students to “walk up” rather than “walk out,” Henning recounted his own involvement with walking up, stating that encouraging students to walk up is not the solution to gun violence.

“‘Walk up’ really means ‘don’t be vocal and public with your fear of being killed in school because it makes me look bad for being pro-gun.’ I walk up every day of my life. I know what it feels like to be isolated by your entire class, to be bullied and have no one listen to you, the victim,” Henning said. “I walk up every day. I walk up to the people who have hurt me in the past and smile and ask how they’re doing. I walk up to kids sitting alone at lunch and join them, even if we don’t have anything to talk about. And most importantly, I walk up to my school, every morning, [at] 7’o’clock, with the notion that I will at least be able to keep my life, if not my confidence or self-esteem.”

Henning said that regardless of the personal pain he has experienced in the past, he “[does] not seek ownership of a gun” and has no desire to hurt anyone, despite no one ever “walking up” to him.

After Henning spoke, Newman took to the stage. She discussed the survivors of the Parkland shooting and the effect that they are having across the country. These students, the inspiration behind the national school walkout, have also prompted CNN to host a nationally televised town hall meeting, in which they were given the opportunity to directly address senators and representatives from the National Rifle Association. Additionally, these students have organized several marches and rallies and have utilized social media to make sure their voices are heard.


“While many people may be surprised at how successful these students have already been, I’m not surprised at all, and you probably aren’t either. I’m here today for the same reason all of you are: because this is more than just a debate over guns. This movement, this spark turned to a flame, is about us. These students are initiating the change they wish to see,” Newman said.

Although the walkouts have been met with some criticism because of the students’ age, Newman pointed out that other young people have made huge influential changes throughout the world in recent years, such as Malala Yousafzai (Nobel Peace Prize-winning equal education supporter), Saira Blair (the youngest person to ever be voted into the United States government), and Joshua Wong (founder of Scholarism in protest of pro-communist education in China).

“Together we will create a future that we want to see. A future with safety, with equality, and with justice. I am so inspired to see students our age making changes. This is our chance to keep the movement going in our school, in our community, and in our nation,” Newman said.

Your vote is your voice

As the demonstration came to an end, Newman thanked all those that supported the students and participated in the walk out, including principal Jake Gourley, whom Newman described as an inspiration and a fantastic principal.


“Thank you so much, everyone, for coming out today. Jadyn, you have been a true leader in this event. I couldn’t be more proud to be your principal, and I’m glad that, when I look into your eyes, I see the future,” Gourley said.

“With that, I will close this out with a quote from this year’s group interpretation play,” Newman said. “Even though it’s a fairytale, it holds many truths. Here’s one of them: “‘Children have a kind of knowing and believing that we adults do not have. There comes a time when every kingdom needs its children. That time is now.’”