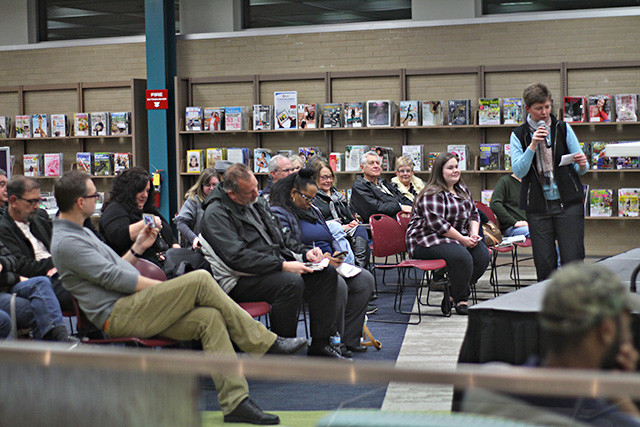 LANSING, Ill. (March 13, 2018) – Dozens of people from Lansing and beyond gathered at the Lansing Public Library last Wednesday for The Lansing Journal’s Open House. The night’s main event was a panel of seven people who have interacted with the Journal from different perspectives:

One of the main topics the panel discussed was the importance of every community having a newspaper. When Eric Crump moved to the Homewood-Flossmoor area about four years ago, he was shocked to find there was no newspaper serving the community. Crump had previously lived in an area that was home to several smaller towns—one with a population of just 1,500 people—each of which had its own paper.

The value of a local newspaper was also recognized by Ernst Lamothe, who works with both The Lansing Journal and Thornton Township (the largest township in Illinois, comprising over 17 different villages and towns). Lamothe explained that Thornton Township hosts many events and provides free services that, when advertised in The Lansing Journal, can reach even more people.

“With Thornton Township being the large organization that it is, it’s really hard to reach everyone in that community,” he explained. “We really want the community to be able to take advantage of our programs. We have so many programs—a lot of our services are free and residents are paying for it with their taxes, and we want to give back to them as well. That’s why once this idea [for a local newspaper] came, we definitely wanted to connect. It’s been a fantastic partnership so far.”

That connection is seen throughout Lansing businesses as well. Kris O’Connor said, “In the [Classy Cuts] salon, a lot of clients love the paper. They talk about it all the time. I’ve lived here my whole life—I’m not telling you how many years that is—but you learn things that you didn’t really know.”

Both O’Connor and Renae Fentress talked about what it was like to be interviewed and published by The Lansing Journal. “The reason I opened Troost, in part,” said Fentress, “is because I love coffee, but also because I really love Lansing. I wanted that to be something that really came across in an interview and in an article. The Lansing Journal, Ashlee [De Wit] specifically, did a phenomenal job of making sure that that was written into it. I loved having someone from the community that I love interview me about the community that I love. It was a lot more personal. Of all the articles, the one from The Lansing Journal is the one that I’m putting in a frame.”

Lansing is a diverse community, and Jongsma wants The Lansing Journal to serve the entire community. Daisy Herrera has offered invaluable help in building bridges to Lansing’s Hispanic community. Her grocery store is a distribution point for the Journal, and she encourages Three Roosters customers to grab a copy. “I tell them, ‘Don’t you want to know what’s happening?’ And then they’ll say, ‘Oh, it’s from here? It’s from Lansing?’ Yes!” Herrera believes that cultural and even language differences do not have to keep people separated from each other. It takes some effort, but “Definitely, you can have all of those connections in one paper,” she said.

During the Q and A session, members of neighboring communities Chicago Heights and Calumet City expressed curiosity about some of the mechanics involved in providing local news every day. Lamothe, Crump, and Jongsma took note of the interest and discussed it briefly after the Open House was over. Though no definite plans have been set, the three would like to encourage others to explore the possibility of starting their own newspapers.

“You may have started a movement,” Jongsma told Crump.

“I hope so,” Crump replied. “Every community deserves a good newspaper.”

Whether you give $5/month or $95, all those dollars help cover the costs of quality community coverage that keeps people informed and connected.

Will you give what you can for yourself, or maybe even a little extra for the “Mildreds” in Lansing?

Choose your level of giving or type in a custom amount: