LANSING, Ill. (March 2018) – Looking around Lansing now, it’s hard to remember that just a couple weeks ago, a record-tying nine straight days of snowfall covered us in a layer nearly two feet deep.

A couple warm days of rain turned the snow piles into one big flood—but we’re not through with winter yet. Chicagoland averages another 5–6 inches of snow every March, and usually sees an inch or two in April.

If the snow starts to accumulate again—or if it makes things slippery—we will see Lansing’s snow plows back on the streets.

Lansing Public Works has nine plows that go out for every snow event, and each one covers a designated section of town. Each of the nine routes includes one main street (like Ridge Road or Wentworth Avenue) that gets plowed first. The routes also include one secondary main street. After those are clear, the plows make their way into the neighborhoods and side streets.


Some of the main roads in Lansing—like Torrence Avenue, Burnham Avenue, and 170th Street—are under the jurisdiction of other entities, like IDOT or Cook County. Lansing doesn’t plow those streets.

When snow piles up or the roads get icy during the day, Ken Soderstrom—the Street Supervisor for the Public Works Department—makes the call to send out the plows. If snow happens overnight, that decision is left up to the police who are patrolling the streets.

When the snowfall is particularly deep or long-lasting, the plows run on 12-hour shifts—called red and green shifts—like they did during the big February storm. Each driver can be on the road for a maximum of 12 hours, and then has to break.

When Lansing got most of its snow, on February 8–9, the plows were on the road for 36 straight hours—and back on the streets just 24 hours later after the next round hit.

When the flakes are coming fast and furious, so are the calls to Public Works, as residents wonder when their streets will be cleared.

“We explain that the main and secondary streets are the most important, but we will get there eventually,” Soderstrom said. “It just takes time sometimes—we do the best we can.”

The best thing residents can do to ensure that their streets are plowed as soon and as effectively as possible is move their cars. The best option is to take the car off the street altogether. But if there’s nowhere to go, then Soderstrom recommends making sure the cars are staggered with neighbors’ vehicles, so the plows can fit through.

“Try to make it as accessible as you can—these trucks aren’t little,” Soderstrom said.

The sheer volume and duration of snow that fell in early February took its toll on the Public Works employees and their plows, but Director of Communications Ken Reynolds noted that Lansing typically receives high praise for its snow-clearing efforts.

“This was a tough one, no doubt about it,” Reynolds said. “But the Lansing reputation has always been good, and overall, the calls I got were positive. I think that the crews really, really did a good job.” 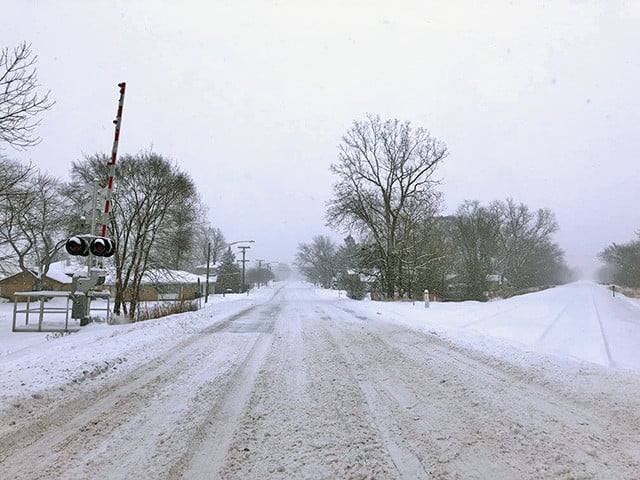