LANSING, Ill. (February 17, 2018) – Crescent Jewelers has been open since 1992 in Lansing, Illinois, and specializes in assisting customers with fine jewelry, including diamonds, watches, and precious gems. The jewelry store occupies the first floor of the building located at 18049 Torrence Avenue.

The basement level of the jewelry store is where thousands of military memorabilia and relics are housed.

Owner Bill Crescent and museum curator David Hilpp recently extended an invitation to the Issac Walton Club of Dolton for a Saturday morning tour. Thousands of war memorabilia are displayed that span hundreds of years. Bill and David have a story that goes with each item, and many are attached to personal stories about how the item came to reside in the museum.

Thousands of remnants are carefully preserved — an ancient samurai warrior, helmets, daggers, bomber jackets, uniforms, and war medals. Newspaper articles describe local war heroes who earned the highest honors, including Sgt. LeRoy Peterson of South Holland, a Purple Heart recipient who died in World War II. Most items were acquired from World War II veterans or their families. Many family members have entrusted their items to Crescent Jewelers because they know that their loved one’s memories will be respectfully preserved and displayed.

Bill shared that he has been collecting war relics since the age of 12. He is now conducting buying events in many Midwest states, including Indiana, Ohio, and Pennsylvania.

Crescent said, “These items all have a story behind them, and they say more about history than many textbooks.”

I came away from the tour with a profound sense of gratitude for the sacrifice that so many men and women made so we can enjoy the freedom we have in this country. Enshrined in our US Constitution are freedoms that include religious freedom, freedom of speech, and the freedom to peacefully assemble. The second amendment of the US Constitution gives every citizen the right to bear arms. It is my belief that these rights are protected by the brave soldiers of our country, and they deserve our honor and gratitude.

The military museum at Crescent Jewelers is a testament to the honor due to these brave soldiers — both past and present. 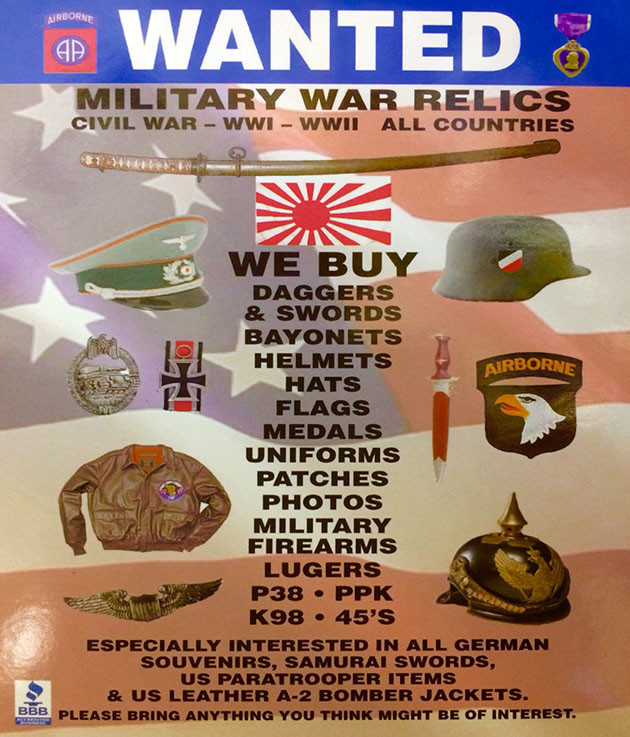