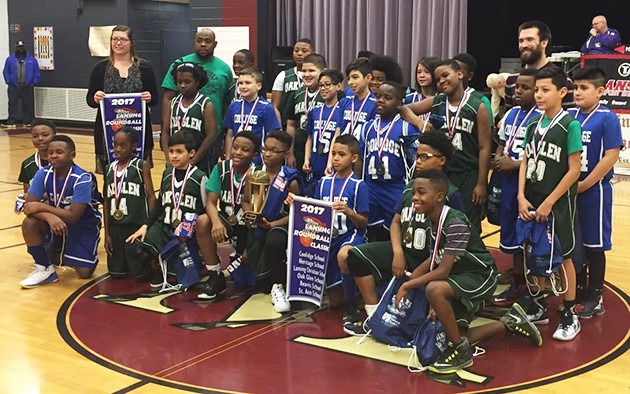 This year the boys teams from Coolidge, Heritage, Lansing Christian, Oak Glen, and Reavis will compete for the team trophy. Halftime of every game will feature a Hot Shot contest that gives the fifth-grade girls from those teams as well as St. Ann a chance to compete.

A school-wide Food Drive Contest to benefit the Lansing Food Pantry is being held the week leading up to the tournament, with the winning school being announced at the championship game.

Donations from local businesses and individuals cover the costs of the tournament, and proceeds from ticket sales are donated to Lansing charities. The admission price is $1.00 for child, $2.00 for adult, or $5.00 for a family. On the night of the championship game, no admission fee will be charged; instead, Memorial’s National Junior Honor Society will collect canned goods for the Lansing Food Pantry.

“Not only does the tournament help various charities,” says Rick Seymour, organizer of the event, “it also allows people from all over Lansing to come together and watch the student athletes compete in a friendly neighborhood competition.”

All games take place at Memorial Junior High school, which is located at 2721 Ridge Road in Lansing. Tickets will be available at the door. The concession stand will be open all dates and before the championship game.

Donations for the event can be mailed to Sally Reynolds, Tournament Director, c/o Oak Glen School, 2101 182nd Street in  Lansing.