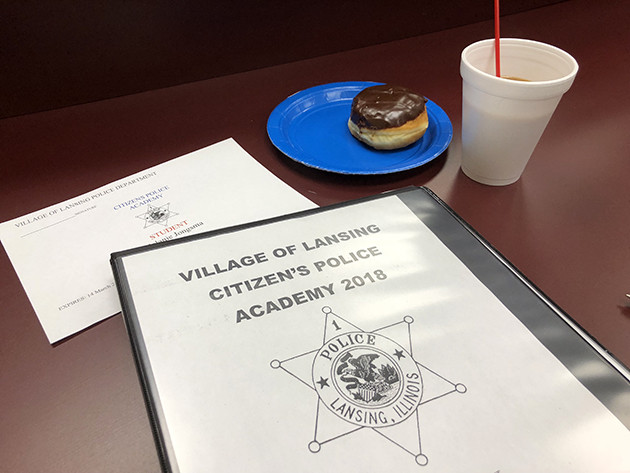 22 of 28 enrollees participated in Week 1 class

LANSING, Ill. (January 17, 2018) – “This is one of the largest, if not the largest, class we have ever had,” said Lt. Scott Bailey in a January 12 email. “Today we have 27 people signed up for the upcoming Citizen’s Police Academy.” By class time, the final enrollment count was 28. Last year, the Lansing Police Department had to cancel the academy due to low enrollment.

As the organizer of the course, Bailey had hoped for some diversity in attendees—not just ethnic diversity, but also age and gender. The 22 enrollees who made it to the first class included 15 Whites, 6 Blacks, and 1 Hispanic. The gender ratio was 16 females to 6 males.

At 17, Alline Batts may be the youngest member of the class. Her career plans include getting a degree in Criminal Justice and then becoming a detective. She believes the Citizens Police Academy will confirm her career choice.

Other class members have less specific hopes for the academy. “I just wanted to get to know more about the community,” said Christine Billstrand, a lifelong Lansing resident. And Marilyn Freeman came looking for “just general knowledge.” Doug Cable had participated in a Local History class offered by Jeff White last year, and he thought the Citizens Police Academy might be a similar opportunity to meet new people and learn new things.

Their presentations used PowerPoint slides and videos to cover such topics as:

Class 1 concluded with a tour of the Lansing Police Department.


The Department is hoping that the nine-week academy will provide an understanding of how the Lansing Police Department is structured, how the different divisions work together, and the role that citizens and police both play in building community.


Classes meet at the Lansing Police Department, 2710 170th Street in Lansing. Contact Lt. Scott Bailey for more information or to be notified about the next Citizens Police Academy: