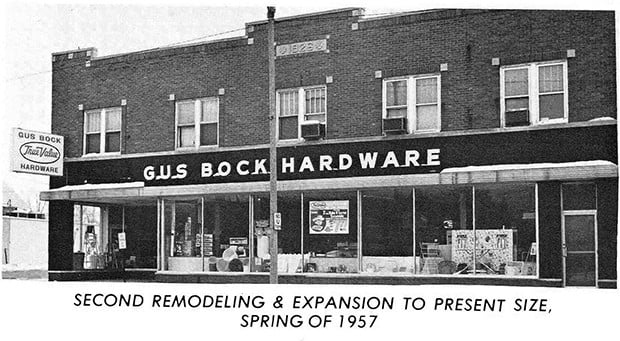 Editor’s note: This is the first in what we hope will be a series of articles featuring businesses that have at least a 50-year history in Lansing. To submit a local business for consideration, email The Lansing Journal.

Gus Bock’s story starts with his family, one of the first to settle in the area. Henry Bock, an immigrant from Germany, moved here in the early 1870s—two decades before the town of Lansing was incorporated. He opened a blacksmith shop on Torrence Avenue, in what was then Oak Glen.

Later, he set up his sons, Henry, Jr., and Gustav (Gus), with the Henry Bock & Sons Hardware and Supplies Shop, located across the street. This first “Bock Hardware” is where Gus learned the business, starting at age 16. For Gus, it wasn’t enough to learn on the job at the hardware store—he also enrolled himself in the Chicago Business College in order to gain additional business knowledge.

The two brothers didn’t always see eye-to-eye, and eventually Henry Bock, Jr., took over the family hardware store. But Gus wasn’t out of the business for long.

Through the years: Gustav Bock, Inc. to Gus Bock’s Hardware

In 1935, Gus opened his own hardware store, Gustav Bock, Inc., in its current Lansing location. The building was then owned by the Schultz family, who offered him space in their Ridge Road grocery store.

According to ads placed in archived issues of the 1935 Lansing Journal, Gus offered not only hardware, but also furnaces and furnace repair, plumbing and heating supplies, washing machines, and paints. The phone number listed was Lansing 6.

Eventually, the Schultz family moved their store elsewhere, and Gus Bock’s Hardware filled the space. In the 1960s, the store became one of the first to join the True Value co-op: store number 21. They switched to Ace in the 80s.

Two of Gus’ four children joined him at his hardware store: Walter and Ruth, both of whom later became part-owners. In fact, Walter spent more than 40 years at Ace before retiring to Arizona in 1982; he died in 2002. Ruth worked at the family store for more than 50 years, and was the last Bock to own it. She lived in Lansing until she passed away in 1998.

Gus Bock wasn’t just the town’s hardware store owner; he was also a member of the Trinity Lutheran Church Men’s Club and the Lansing Lions Club, and he spent 45 years as the Village Treasurer. He was known as a kind man who was helpful and knowledgeable—traits that still characterize the stores that bear his name.

That name is still atop the hardware store, of course; but there is also a park named for him at 175th Street (the site of the dog park planned for 2018), and there’s a road with his family name that runs from 183rd to 186th on the west side of Lansing.

Keith Grill, Sr., never met Gus Bock, but he knows the history. He began working for the Bock family in 1975, just a year after Gus passed away. He managed the store, under the condition that he would eventually buy it. Neither Walter nor Ruth had children, so they knew that when they retired, there wouldn’t be another Bock to take ownership.

Grill, Sr., was a fitting choice to take over—the hardware business runs in his family, too. Grill’s father opened a hardware store in 1929 in Midlothian, a store that survived the Great Depression. When his parents retired in 1962, he ran the store with his brother. About 12 years later, he sold his half to his brother and started looking for a job. “That’s when I came to Lansing,” he said.

He purchased the store from Walter Bock and Ruth Bock in the 1980s, but he left the name alone. “At first, I thought it might be good to simplify the name,” Grill said—but Ruth, still the owner at the time, wouldn’t allow it. “I later realized the name had a lot of importance.”

The store has since expanded to two other locations—Dyer (1990) and Munster (2004). Both opened under the Grill family’s ownership, but still bear the “Gus Bock” name. When they were establishing the new Ace store in Dyer, Grill says, one customer told them he would have been there much sooner if he had known it was a Gus Bock hardware. So they added the Lansing legend’s name to the new shop.

Grill, Sr., retired in 2007, and his sons took over the business. So Keith Grill, Jr., and Rob Grill are third-generation hardware store owners.

“We are very pleased that the Lansing community has supported us over the years, and we’re very thankful for that,” Grill, Sr., said.

Grill, Jr., who manages the Lansing store, plans to keep the family business going. “My son is 14,” he said. “Hopefully a fourth generation can take over.”