information provided by the Office of Governor Bruce Rauner

SPRINGFIELD, Ill. (November 8, 2017) – “The Bicentennial is a once-in-a-lifetime invitation to fall in love with Illinois all over again,” says Governor Bruce Rauner in a letter to Illinois counties and municipalities. The letter explains that December 3, 2018, is Illinois’s 200th birthday. Governor Rauner is inviting municipalities throughout Illinois to participate in a 365-day celebration, beginning with a flag-raising ceremony featuring the Illinois Bicentennial Flag on Monday, December 4. 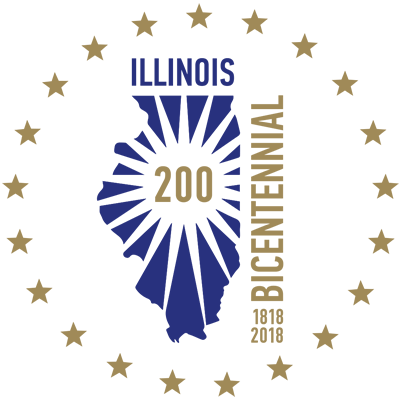 “Your Flag Raising Ceremony will help kickoff a yearlong celebration that pays tribute to the people, places, and things that are being BORN, BUILT, & GROWN here every single day,” the governor’s letter continues. “Our Bicentennial will showcase Illinois’ influence on American history and culture, achievement and invention, business and art.” A complimentary Illinois Bicentennial Flag was included with the letter.

Lansing’s flag-raising ceremony will take place at the Municipal Center at noon on Monday, December 4, 2017. The Illinois Bicentennial flag will be flown under the Illinois State flag during the year-long celebration.

Historically significant dates in the coming year include:

The Lansing Municipal Center is located at 3141 Ridge Road in Lansing, Illinois. Questions about the flag-raising ceremony or Lansing’s participation in upcoming Illinois bicentennial events can be directed to the Village at 708-895-7200.