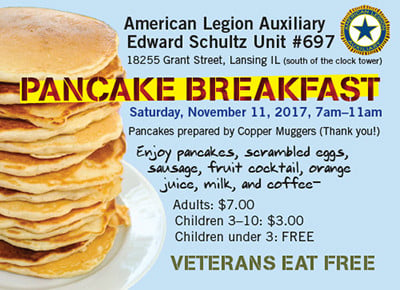 LANSING, Ill. (November 11, 2017) – “We’ve had more than usual,” said Sandra Gangolf about the crowd at the Veterans Pancake Breakfast. Gangolf is President of Lansing’s American Legion Auxiliary, which organizes the breakfast each year. The pancake breakfast is usually scheduled for the Saturday before Veterans Day. This year the Auxiliary was able to have it on the actual day. Two hours into the event, Gangolf was pleased with the turnout.

Michelle Kolwyck and Lorraine Przybyl were at the front door, welcoming guests, selling tickets, and making sure everyone had an opportunity to learn more about the American Legion Auxiliary. The Auxiliary is a nationwide organization of people who advocate for veterans and their families. The Lansing branch—American Legion Auxiliary Edward Schultz Unit 697—meets on the first Wednesday of each month at the Post at 18255 Grant Street (just south of Clock Tower Plaza).

You didn’t have to be a veteran to enjoy a plate full of pancakes, eggs, and sausage at the Veterans Pancake Breakfast, but if you are, you could enjoy it free of charge. A crowd of about 100 is typical, and Gangolf was projecting this year would see more.

The Lansing Copper Muggers donated their time and pancake expertise to help ensure the event’s success. Dan Ridderhoff, Frank Sutter, Bill Artus, Scott Sonnenberg, and Gary Jensen were among the Copper Muggers involved in setting up the giant griddle, dolloping batter, and timing the actual flipping of the flapjacks. Ridderhoff estimated they would flip about 300 pancakes during the four-hour event.

The Veterans Pancake Breakfast ended at 11:00am, in time for the traditional Veterans Day Memorial Service held at the Edward Schultz post.