Pastor John Holyer of Trinity Lutheran Church opened the meeting with a prayer of blessing. He also let the Board and public know about a few of the helpful services Trinity makes available to the Lansing community, including a free community meal on the fourth Monday of every month, and confidential, one-on-one care and listening by trained Stephen Ministers. Trinity Lutheran Church is located at 2505 Indiana Avenue in Lansing. Call 708-474-7997 for information.

Village Attorney Matthew Welch reported on the property at 19064 Burnham Avenue (formerly La Balanza grocery store), “As many of you know there was a lawsuit filed for abandonment. The Village obtained one of two parcels through this process. There was a remaining parcel that was not obtained. We’ve been working with the current owners, the Floreses. We’ve reached an agreement to acquire that last remaining parcel. There’s going to be a resolution authorizing the acquisition of that parcel for $7,500. Once that is acquired, this Board, I believe in March, approved the redevelopment agreement with another group to rehabilitate the La Balanza property. As soon as we acquire this last parcel, we will then turn around to convey pursuant to the redevelopment agreement that was approved in March.” A resolution about acquiring the remaining parcel will be on the agenda for the next Board meeting.

Speaking of the Police and Fire Pension Board…

Former Lansing Police Officer and Public Works employee Peter Krilich was appointed to the Police and Fire Pension Board. “No person holding an office under a municipality, shall be a member of the board of fire and police commissioners,” says the Illinois Municipal Code, but Krilich’s retirement from the force was celebrated with a certificate from Chief Dennis Murrin just moments before he was officially appointed as a Police and Fire Commissioner. During a speech to the Board and the audience, Krilich said, “All of us together shared some great times.”

Administrator Podgorski and Village Engineer Jeff Pintar provided an update on the Quiet Zone project, which The Lansing Journal reported in detail in a separate article: 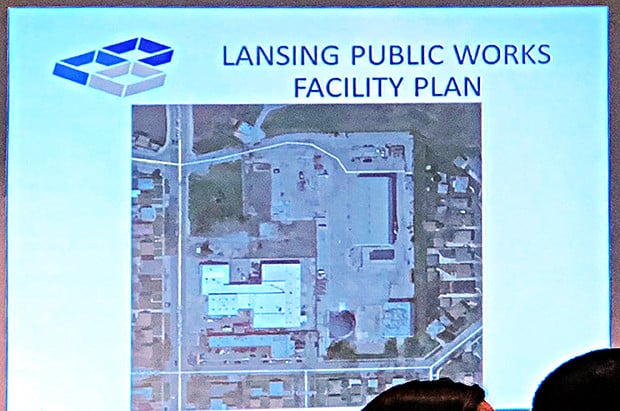 The Village is proposing the purchase of the building at 17035 Burnham Avenue. This acquisition would open up opportunities for designing a campus that will better meet the needs of the Public Works department. The updated construction will also create a more attractive and professional-looking entrance “gateway” on the north end of town. Village Engineer Jeff Pintar’s PowerPoint presentation gave the Board some visual background on the site and various options that had been considered. Pintar also explained a number of factors that make the purchase of the building a good opportunity for Public Works and the Village. The appraised value of the building under consideration is roughly $560,000; the agreed-on purchase price is about $346,000. If the purchase is approved at the November 21 Board meeting, Pintar will develop more detailed drawings of the proposed development.

The Board meeting adjourned around 8:45pm to Executive Session to consider the “appointment, employment, compensation, discipline, performance or dismissal of specific employees” and “purchase or lease of real property for the use of the public body.”

The next Committee of the Whole meeting and Village Board meeting are scheduled for Tuesday, November 21 at 7:00pm. Meetings are held in the Lansing Court Complex at the Police Station, 2710 170th Street in Lansing, Illinois. Agendas for these meetings are to be posted at least 48 hours prior, and they are typically found on the Village website.