SOUTH HOLLAND, Ill. (August 19, 2017) – “Teens and police play on the same team for the pride of their town,” said the flyer announcing the first-ever Taste of Thornton Basketball Tournament. The five-on-five tournament was held at South Suburban College, and participants from seven different communities within Thornton Township competed. The team from Lansing took home the first-place trophy.

In planning the event, Thornton Township officials intentionally placed officers and teens on teams together. “The way you make a community stronger is working together, loving each other, and knowing each other,” said Frank M. Zuccarelli, Thornton Township Supervisor. “We shouldn’t have kids and police officers on opposite teams. We should have them side by side, helping lift each other up.”

Zuccarelli is a three-time winner of the Township Supervisor of the Year award, and this year Thornton Township is Illinois’ Township of the Year. The basketball tournament was part of Zuccarelli’s Faith, Dignity, and Respect initiative, which brings together elected officials, law enforcement, and community leaders to learn from each other. The goal is to build relationships that can increase trust and prevent violence and unrest.

Lansing Trustee Maureen Grady-Perovich attended the tournament and said, “I am so proud that I live in a place that would put on an event like this. I don’t know many government organizations who are doing this kind of large-scale event and community outreach.”

Township officials were pleased with the success of the tournament. Seeing officers and teens laughing together and encouraging each other throughout the day, Zuccarelli decided, “This is something we are going to do every year, and it is going to be bigger and better.”

To make sure you receive daily notifications about stories like this, subscribe to the online version of The Lansing Journal: 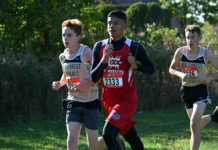